2024 Olympic Games: What has to happen for Toronto to bid

Should John Tory decide to bid, it would almost certainly become a federal election issue

Toronto Mayor John Tory has a big decision to make, a decision that looks to be his alone, and he doesn’t have much time.

He has to decide by Sept. 15 whether Toronto will submit a formal bid to host the 2024 Summer Olympic Games.

Technically, it is a country’s Olympic committee that sends along the nomination of a host city to the International Olympic Committee.

But Canadian Olympic Committee president Marcel Aubut has already indicated that he is waiting for Tory to give the thumbs up or down, something the Toronto mayor has said he won’t do until after the Parapan Am Games close, which happened yesterday.

What’s more, if Tory decides to go for it, neither the federal government nor the Ontario government, nor even Toronto City Council, needs to weigh in, for the moment anyway.

According to those who follow the process closely, all the mayor has to do is say yes to the COC and the wheels start to turn.

Obviously, Tory isn’t going to move ahead on something of this magnitude unless he feels he has the backing of other levels of government and the business community.

But he has certainly added to the speculation when his office confirmed he had a private meeting last week with Aubut and Bob Richardson, the chief operating officer of Toronto’s 2008 Olympic bid.

One thing probably holding him back is that Tory has also said he doesn’t want to be the mayor who pursues a third failed Olympic bid by Toronto. And there are many in the media at least who feel the IOC is keen to see the Summer Games return to Europe in 2024 after these next two stints (Rio de Janeiro and Tokyo) abroad.

Another problem is that the IOC is in the midst of changing the bidding process, apparently in the cause of accountability and transparency, and no one seems to know at this point what the new deadlines and rules are all about.

Toronto had been considering whether to submit a third Olympic bid until January 2014. That’s when Toronto’s economic development committee unanimously decided against one, saying even then that “time is of the essence.”

That ended the discussion and the debate, it seemed. That is, until about a month before the Pan Am Games began in July.

On the Toronto 2024 Olympic Games Bid Facebook timeline, the frequent posts stopped a few days before the economic development committee’s decision. There was only one additional entry over the next 19 months until, starting June 10, the posts become frequent again. 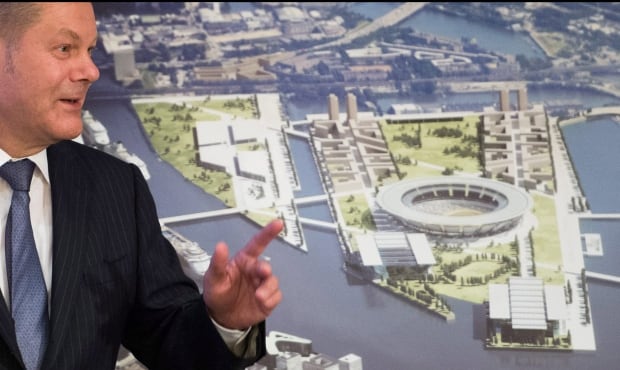 Hamburg, Germany’s 2024 bid plans were so far along last September that the mayor, Olaf Scholz, could show off those plans at a press conference. (Daniel Reinhardt/AP)

That day the Toronto Star published an exclusive interview with Aubut in which he called for a Summer Olympics bid by Toronto. “I’m absolutely convinced that Toronto is ready,” he told The Star.

Mind you, other cities are far ahead of Toronto in preparing their bids, says Rob Livingstone, who runs the website GamesBids.com, which aims to be an independent source of the bidding process.

Those cities include Budapest, Hamburg, Paris, Rome and Los Angeles, among others, says Livingstone, a Toronto-based journalist and analyst.

But he says that’s not necessarily a problem because it is only after Sept. 15 when the heavy lifting has to be done — including  getting funding guarantees from city council, the province and the federal government.

A 2013 feasibility study put the cost of preparing a pre-bid analysis at $1 million, and the price tag for Toronto going through just the bidding process alone at between $50 and $60 million.

If Toronto does bid, federal funding could become an issue in the Oct. 19 federal election, with the federal party leaders undoubtedly being pushed to make their positions known.

The IOC is in the midst of changing the bidding process, and Livingstone says that in early August it “shuffled up the way the bid process is going to work this time.”

In 2014, the IOC unveiled a new direction, what it called Agenda 2020. The goal is to address the sustainability and accountability issues around the Games, which have been getting ever bigger and more expensive, causing some cities to pull out.

After the estimated $51 billion spent on the Sochi Winter Olympics in Russia, only two cities bid for the 2022 Winter Games, which ultimately went to Beijing. Janice Forsyth, former director of the International Centre for Olympic Studies at Western University, says it almost appears ‘the IOC is making up these rules as they go along.’ (Debra Campbell)

Janice Forsyth, who recently stepped down as the director of the International Centre for Olympic Studies at Western University in London, Ont., finds the lack of clarity on the IOC bid process quite frustrating.

“Everything has changed with Agenda 2020, and no one is being clear about what exactly is required” on Sept. 15 and the later deadlines, she says, adding, it almost appears “the IOC is making up these rules as they go along.”

The IOC hasn’t won a gold medal for transparency, nor has it been supportive of city agendas, Forsyth says, an observation that was also in the 2013 Toronto feasibility study.

“I’m sure Mayor Tory is having a hard time getting information from the COC and the IOC because, of course, the COC’s agenda is to encourage Tory to build those Olympic Games.

“But bravo for Mayor Tory for actually saying we’re not going to make a decision before we have all the facts,” she says, adding he could probably “mobilize public support for more facts if he came out and talked about the challenges of building these Games.” 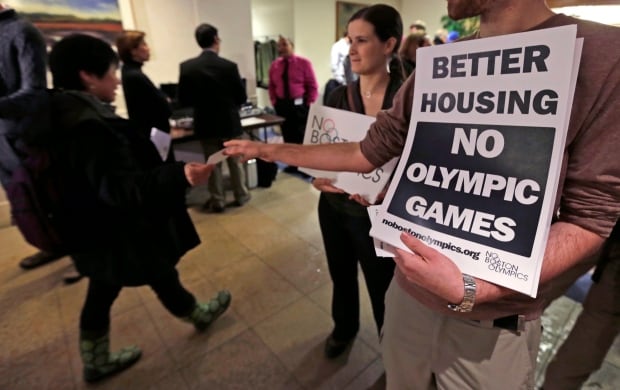 Boston residents were apparently so hesitant about hosting the 2024 Olympics and spending public funds on the Games that the city has decided not to bid. (Charles Krupa/Associated Press)

Most U.S. cities that have made a bid or are considering one have had these discussions, she says, noting that in Boston, where there were complaints about the lack of transparency around that city’s bid for the 2024 Games, opposition became so strong that Boston withdrew from the bid process.

Public support for the Games is crucial, says Forsyth, even at this early stage, as the IOC doesn’t want to go where there isn’t a supportive public, especially under Agenda 2020.

Despite the confusion around the IOC’s Agenda 2020, Forsyth still feels the 2024 Games are up for grabs right now as the IOC is concerned about its own image and putting recent scandals behind it.

“So if Toronto pledges, for instance, that it can re-use its Pan Am facilities at no extra cost to the people — which is not true — I think the IOC might potentially choose to award the games to Toronto, because then it will meet its 2020 mandate for accountability and sustanability.” 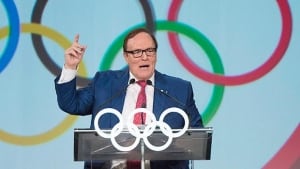 As Forsyth and others have pointed out, the Pan Am venues don’t meet IOC building requirements.

Rio de Janiero, for example, built what Forsyth says was the best velodrome in the world for its Pan Am and Parapan Am Games in 2007. But it was torn down and rebuilt to meet IOC regulations.

Livingstone says in looks like the 2024 games will go to Europe, which has lots of IOC members.

He says if the Toronto mayor enters the race expecting to win “that’s the wrong attitude.” While that can be the public face, Livingstone says Tory’s attitude ought to be “‘let’s go in and lay the groundwork, there’s a lot of legacy in bidding, even if you lose, and we’ll be ready for 2028.'”