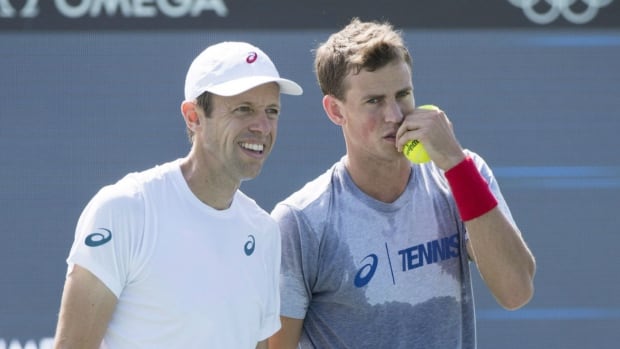 Canadian Daniel Nestor, left, and Vasek Pospisil can clinch a medal with a win in the men’s doubles semifinals on Wednesday. © Ryan Remiorz/Canadian Press

The Rio Olympic Games are in full swing, and Canada will be competing in several events on Wednesday.

Here’s a look at three events involving Team Canada that should be worth your time:

Canada (2-0) can all but guarantee a trip to the quarter-finals with a win over Senegal (0-2) in its third match of the preliminary round.

The Canadians are coming off an impressive comeback victory over Serbia on Monday.

If you’re an NBA fan, the start-studded American men could receive their first challenge of the tournament when they take on Australia, led by Andrew Bogut, at 6 p.m. ET.

Canada’s last shot at a medal in tennis rests on the shoulders of 43-year-old Daniel Nestor and 26-year-old Vasek Pospisil.

They can guarantee at least a silver with a win over Spanish pair Rafael Nadal and Marco Lopez.

Canada goes for another medal in the pool when Santo Condorelli competes in the men’s 100-metre freestyle final.

Condorelli was tied with Australia’s Cameron McEvoy for the third-fastest time in the semifinal heats.

Penny Oleksiak, Canada’s breakout star of these Games, will have another chance to show what she can do as well. The women’s 100 freestyle heats and semifinals begin on Wednesday.