As seen in the following video, courtesy of TMZ Sports, Goodell said the NFL is “looking into it” when asked about the Brown situation at a Los Angeles Chargers event:

Brown could be subject to a fine due to the NFL’s ban on social media until after postgame interviews are conducted.

Let’s start our preparations. We just spotted these a–h—- a day and a half. They played yesterday. Our game got moved to tonight. We’re going to touch down at 4 o’clock in the f—ing morning. So be it. We’ll be ready for their ass. But you ain’t got to tell them we’re coming.

Tomlin’s comments were in reference to the Pats playing Saturday, while Pittsburgh’s contest against the Chiefs was moved from Sunday afternoon to Sunday night due to an ice storm.

While Tomlin apologized for the language he used, he also said it was “foolish,” “selfish” and “inconsiderate” of Brown to stream the speech, per ESPN.com’s Jeremy Fowler.

The All-Pro wide receiver later tweeted the following apology for his actions: 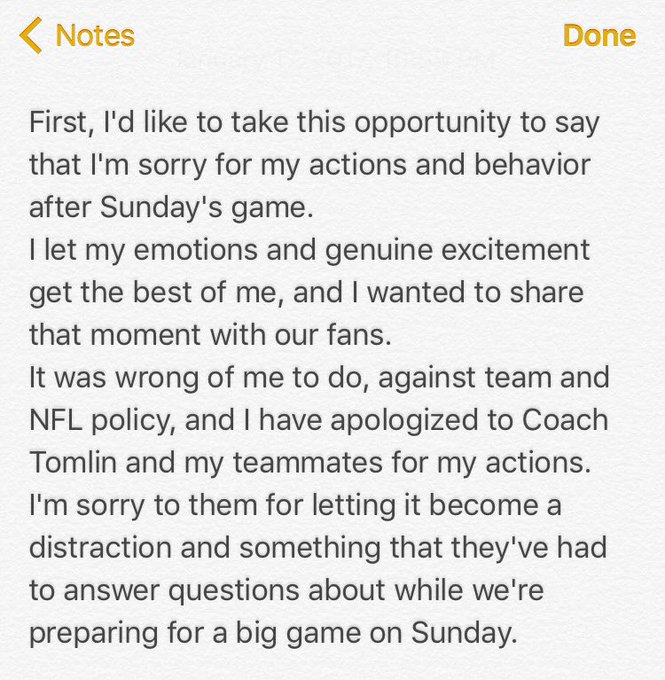 Although Brown made headlines for what he did after the game, he was key in the Steelers’ moving on to the AFC Championship Game, as he burned the Chiefs for 108 yards on six receptions, including the clinching first down.

Pittsburgh may need a similar effort from Brown to upset the Pats when it faces them Sunday at 6:40 p.m. ET to determine the AFC’s Super Bowl LI representative.