Do you want more exposure for your small business on social media?

Wondering if partnering with influencers can help? 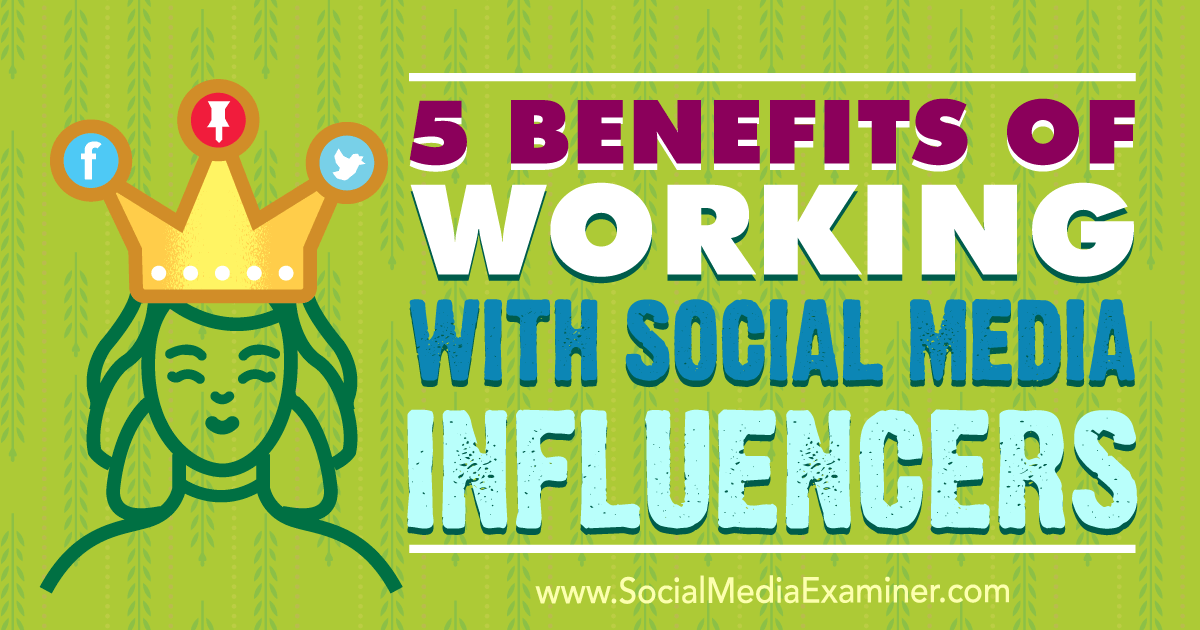 The face of digital marketing has changed many times in the past few years. Keyword optimization alone won’t have a significant impact on your search engine ranking. Google favors high-quality organic links, so without high-authority sites linking to you, you’ll have a tough time trying to outrank your competitors.

If you partner with influential bloggers for features and reviews of your products or services, it will help you build high-quality links to drive traffic and improve your search engine ranking. Micro-influencer bloggers have a large enough following to have a significant impact, and because they’re so influential, they often have a good domain authority.

Good Greens, a Cleveland-based nutrition bar company, partnered with micro-influencers to promote their products. Established in 2011, the company’s goal was to create healthy bars that also taste good. As a startup, they didn’t have the budget for a major marketing campaign.

So instead of traditional advertising, they reached out to 30 influential micro-bloggers in the Cleveland area and developed relationships with them. They gave the bloggers free samples of their nutrition bars and asked them to consider writing about the bars on their blogs. 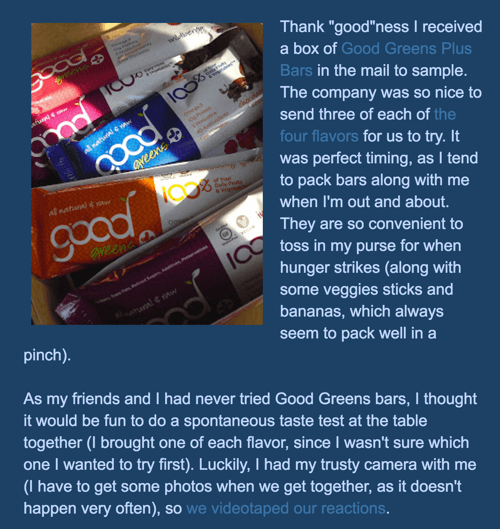 Local blogs like Rawdorable and Spit That Out! featured the Good Greens nutrition bars and clearly described what they loved about them. The bloggers also educated their readers about the contents of the snacks and how healthy they are. Some even offered free samples so their subscribers could try the products. 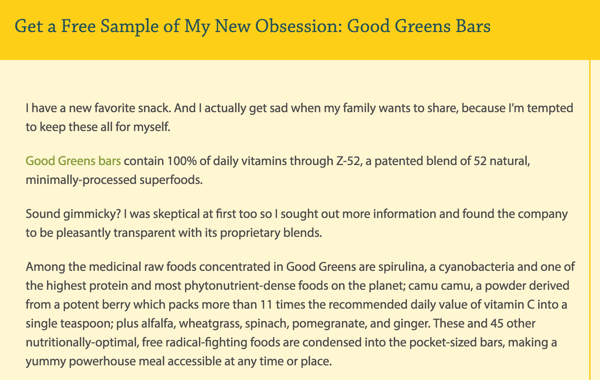 Spit That Out! featured Good Greens bars on its site.

As a result of the campaign, Good Greens saw their website transform from a PR0 to a PR3. It also helped drive 2,000+ visitors a month and increased their sales average by 50% in just four months.

Micro-influencers specialize in specific niches. When you target the right influencers, you’ll boost your brand’s visibility and raise awareness within a relevant market. This will help increase the quality of leads you generate, which also means a higher ROI.

It’s important to work with influencers who are both relevant to your niche and will appreciate your products. Get in touch with them and send them some free samples so they can try your products. Make sure you let them know the benefits of the products so they can share that information with their followers.

Man Tea, for example, partnered with several micro-influencers to promote their healthy tea for men. To select their influencers, they considered two main criteria. The micro-influencers had to be male, since the product is designed for men. They also needed to be in the fitness and health industry, because the company wanted to target health-conscious consumers.

By choosing the right influencers whose followers were already interested in healthy food and lifestyle choices, Man Tea made sure their campaign would reach a relevant audience. The influencers (who received free samples of the products) were asked to share images of the product and highlight its benefits, which helped grab the attention of their social media followers.

Athlete Daniel Rutten posts a photo with Man Tea and highlights the benefits on his Instagram account.

Athlete Daniel Rutten, who has 14K+ followers on Instagram, posted a photo of himself enjoying the tea and highlighted several of its benefits in the caption. His post alone generated more than 1,000 likes. Another micro-influencer Man Tea worked with was Filip Tomaszewski, who has 7,800+ Instagram followers.

Micro-influencer Filip Tomaszewski poses with Man Tea and shares the benefits with his Instagram followers.

When choosing micro-influencers for your digital marketing campaign, don’t make the mistake of focusing on reach alone. Influencers with high follower counts may help you reach a larger audience, but only a small percentage of those consumers will be genuinely interested in your product.

As a small business or startup, you need to make sure that every penny you spend on marketing yields the highest possible ROI. When you target the right micro-influencers, you ensure that your message will reach a relevant audience of consumers who are much more likely to be genuinely interested in what you offer. This will result in higher-quality leads and an increase in ROI.

Giveaways and contests are excellent ways to engage your audience. They can also help you reach new audiences relevant to your business.

Nanatang Bakes, a privately owned bakery, chose to promote a giveaway with the help of micro-influencers. The campaign helped increase their brand awareness by reaching and engaging new audiences.

The bakery collaborated with influential food Instagrammer @weeatfish, who has 5,800+ followers. The micro-influencer posted an image of a Poké ball cake designed by the bakery. In the caption, they announced the giveaway to their followers and told them step-by-step how to participate. 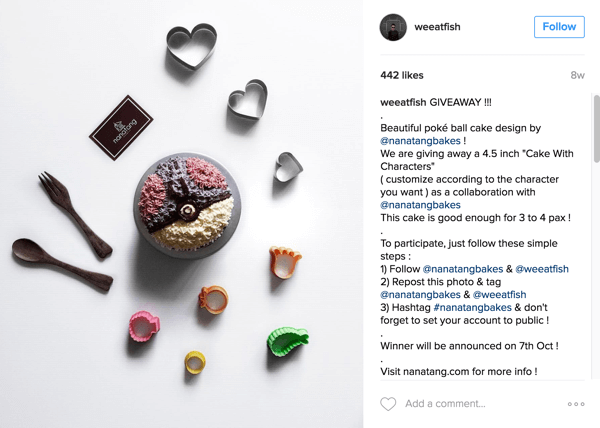 The rules of the giveaway required users to follow both the bakery’s Instagram account and the influencer’s account. Contestants also had to repost the photo, tag both accounts, and include the branded hashtag #nanatangbakes in the caption.

The bakery also partnered with influential foodie Instagram account Singapore’s Café Food, which has 43K+ followers. Both micro-influencers told their followers about the prize, which was a 4.5-inch cake that could be customized with different characters. Both posts received hundreds of likes and comments from people interested in the contest.

If you’re a startup or small business, there’s a good chance that many of a micro-influencer’s followers have never heard of you before. And because they’ve never heard of you, they may be reluctant to spend money on your products or services, even though someone they respect is promoting them. 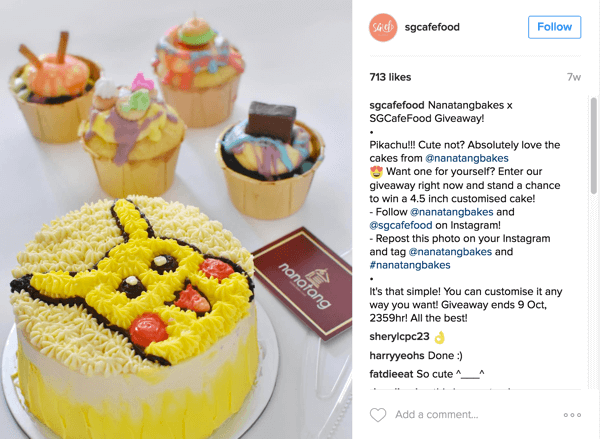 Giveaway contests are a great way to engage those followers and encourage them to try out what your business has to offer. If you require people to follow your social media account to enter the contest, you can grow your own following as well. Before you launch any social media promotion or contest, make sure you check out the platform’s rules and regulations and follow them.

Regardless of how well an influencer promotes your product, some consumers may still be hesitant about giving you their money. Give people a reason to take action by providing them with a special discount code that’s valid for a limited time.

Affordable luxury watch brand Lord Timepieces worked with a community of micro-influencers to promote discount codes for their products to drive sales. They chose micro-influencers in lifestyle and fashion categories for the campaign.

Each micro-influencer then posted an eye-catching image of the watch with their unique discount code, which could be used to get 10% off on purchases from Lord Timepieces. 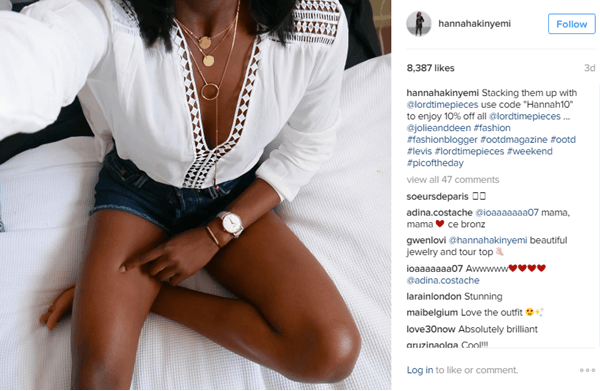 Model Hannah Akinyemi features a watch from Lord Timepieces along with a discount code on Instagram.

Shout-outs, reviews, and features may boost your brand’s visibility and can even generate more engagement. However, many consumers will still be reluctant to make a purchase from an unknown brand or startup. Increased exposure and engagement won’t do much for your bottom line if people aren’t buying from you.

Promoting discount codes through micro-influencers can optimize your digital marketing efforts by giving people another reason to buy your products. Creating a unique discount code for each influencer will help you track your campaign’s performance more accurately.

With unique discount codes, you can easily determine how many conversions each influencer is generating. If you’re paying the influencers commissions, this data will also help you pay them accurately.

Appeal to the emotions of your target audience by standing up for a cause. Promote your cause through trustworthy micro-influencers to further build trust with your audience.

Serengetee, an ethical clothing startup, partnered with micro-influencers to build awareness about their brand and a cause they support. 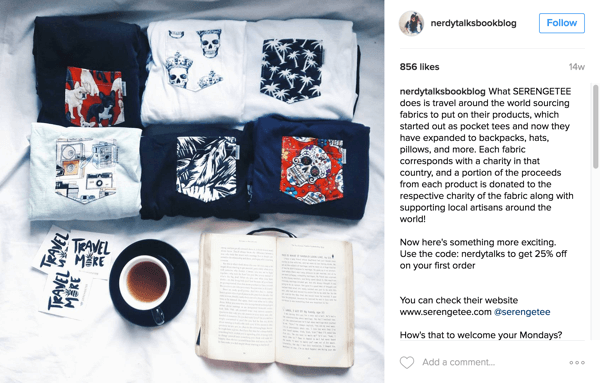 Nerdy Talks Book Blog features Serengetee products and informs followers about the cause on Instagram.

They worked with influencers like Eunice M of Nerdy Talks Book Blog to feature their products and promote a cause they care about. In the post above, the caption informs followers that Serengetee donates a portion of their profits to a charity in the countries where their fabrics are sourced.

Serengetee also partnered with influential travel Instagram accounts like Travels Destination to promote their products and cause. The company gave each influencer a unique discount code for 25% off to share with their followers to further encourage sales. 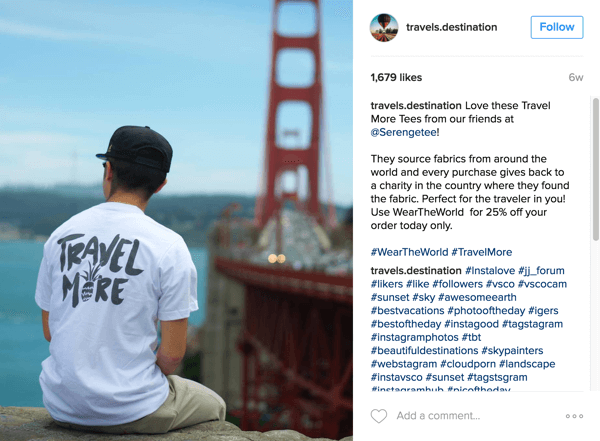 Travels Destination shares Serengetee products and cause with their Instagram followers.

With so many bigger, better-known competitors out there, it can be difficult for startups and small businesses to stand out from the crowd and win the trust of their target audience. And when they’re able to establish their business as trustworthy, they often find it challenging to make a lasting impression with consumers.

When you stand up for a cause that resonates with your target audience, it dramatically improves your brand’s ability to win over their hearts and minds.

In Serengetee’s case, they partnered with micro-influencers to spread the word about how they donate a portion of their proceeds to helping people. Because the information came from influencers whom the audience already trusted, it maximized their efforts to establish trust with consumers.

These five tactics will help you optimize your digital marketing by working with micro-influencers.

You can start by building a relationship with local bloggers to boost your search rankings. With the help of relevant micro-influencers, generate high-quality leads that yield a higher ROI. Use influencer-promoted giveaways and contests to engage a new audience, and drive conversions through unique discount codes.

Finally, micro-influencers can also educate your target audience about a cause you support. This helps establish meaningful relationships with potential customers, which is crucial for success, regardless of your business size. Make the most of the examples provided here and watch your small business grow.