Even if you haven’t had a Wendy’s burger or Frosty in years, you’ve probably heard about their social media this year.

It started with their hilarious clapbacks, in which they called out everyone from McDonalds to trolls.

Then it was the #NuggsForCarter tweet that went viral. On April 5, 2017, Carter Wilkerson tweeted at Wendy’s asking: 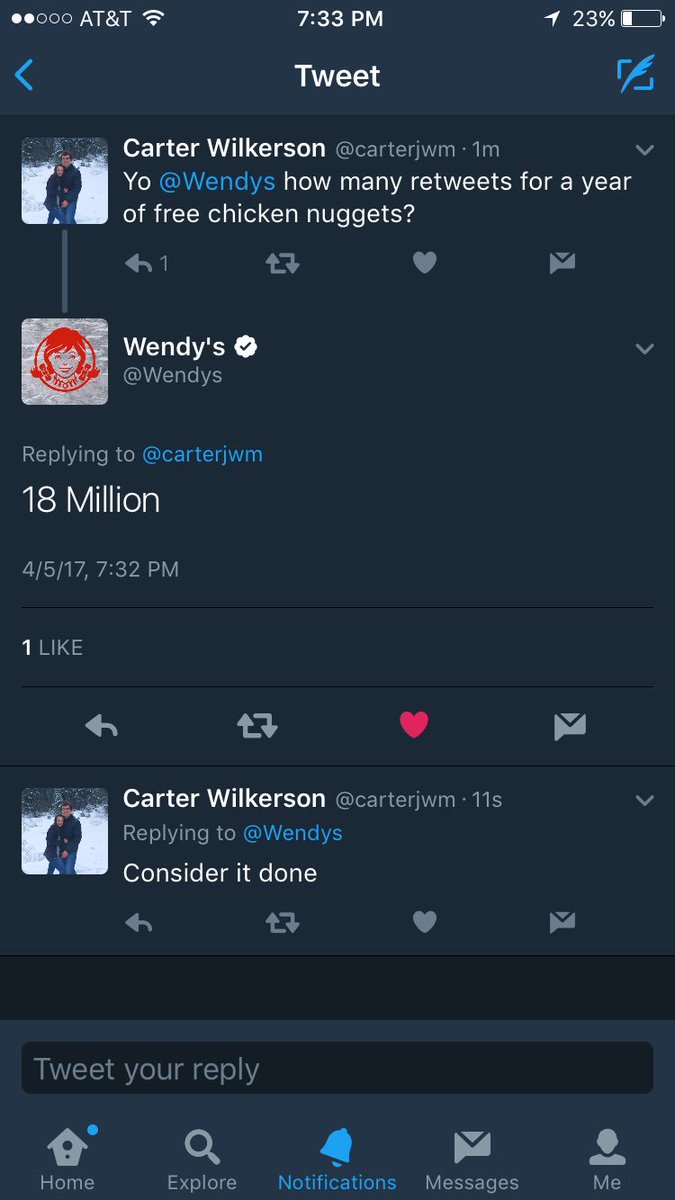 HELP ME PLEASE. A MAN NEEDS HIS NUGGS

Wilkinson soon gained a following, and just set a new record for the most retweeted post of all time, beating Ellen DeGeneres’s Oscar selfie, which had 3.2 million retweets.

So how did Wendy’s blow up on social? What can we learn?

I had a chance to hear Brandon Rhoten, Head of Media, Advertising and Digital/Social for Wendy’s, at the WOMMA Summit in NYC where he shared some great insights into their success:

Rhoten explained, “Don’t just hire someone because they’re young and have a Snapchat account. Follow their social accounts. Make sure they understand the platforms.”

2. Let Them Do Their Job

“When one of my team saw Carter’s tweet, asking for a lifetime supply of nuggets, they messaged me to ask if we could engage with him and possibly give away free nuggets for life. I told them, “Yes,” and they ran with it. Hire good people, give them direction and a framework, and let them do their job,” said Rhoten.

Most brands have several people handling the day-to-day posts, so you need a clear direction to develop and maintain a distinct voice.

Rhoten said, “Our voice is Chris Pratt’s in Guardians Of The Galaxy. We don’t have any superpowers and we’re not superhuman. We’re just a regular guy who happens to be funny and a little sarcastic.”

4. Know How You’re Going To Engage

Rhoten said, “Everyone needs to know how we’re going to engage, how far we’ll take it, etc. We’ve got to constantly ask ourselves, ‘Can we improve the conversation?'”

“Everything interesting in marketing has an inherent risk involved,” stated Rhoten. “It’s better to take a take a chance and risk alienating some people then to play it safe.”

“If you’re like everyone else then no one will care and you’ll never command an audience.”

Rhoten said, “Most brands suck at social. There are maybe 20-25 brands that are interesting. Wendy’s stands out because we’re different…Think about what makes you interesting. Focus on that. You have to find that thing and leverage it across all platforms.”

Whether you love the way they interact on social or hate it, you’ve got to admit that you know exactly who Wendy’s is now. You couldn’t say that ten years ago.

So, whether you have a boring B2B company or a hot consumer brand, you can have fun on social.

Go ahead, take a chance and be different. Remember, if you try to appeal to everyone then you end up appealing to no one.