Aboriginal Artists Shut Out of Nathan Phillips Pan AM Games

Fort York pavilion failing to attract visitors despite proximity to Pan Am Park.

Aboriginal artists hoping to sell their crafts to Pan Am Games visitors are upset they’ve been cut off from Nathan Phillips Square, while the Aboriginal Pavilion set up at Fort York is failing to draw crowds.

The Aboriginal Pavilion — part public education centre, part shop for Ontario artisans that was set up by the Aboriginal Leadership Partners to run concurrently with the Games — is based just a short distance from Pan Am Park.

So far, despite featuring artisans from Thunder Bay and further afield, it’s attracted few people and craftspeople haven’t made much money. Cynthia Lickers-Sage, the pavilion’s executive producer, said organizers had expected thousands to visit during the Games.

“I thought that it would be ground-breaking, but it’s not,” said Margaret Cozry, of the SweetGrass Gallery. 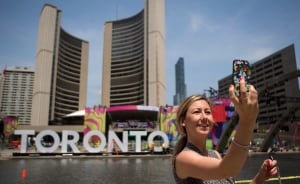 Nathan Phillips Square, and its giant Toronto sign, have been one of the busiest hubs of this summer’s Pan Am Games. (Rebecca Blackwell/Associated Press)

Some vendors at the pavilion, which is not directly affiliated with TO2015, say they’ve made just over $200.

That prompted Toronto artist Nathaniel Big Canoe to try and sell his wares from a tent at Nathan Phillips Square on Tuesday, which has been bustling throughout the Games. He said he was quickly told to take it down or risk being arrested.

Big Canoe says he has a permit to sell at any park in Toronto, but was told Nathan Phillips Square is private property.

He says all he wants is “to be able to have one booth with the collective of artisans and crafters from Fort York to be able to represent over here.”

Big Canoe said Pan Am officials are considering letting him hand out pamphlets about the pavilion at Nathan Phillips Square.

TO2015 does have official host First Nation

Tammy Bondy, a native person living in Toronto, said she didn’t even know about the pavilion and that there should be some First Nations representation at Nathan Phillips Square during the Games.

“They’re getting booted out, that’s not fair. Why can’t we have a voice as native people on our own land? It’s horrible.”

TO2015 marks the first Pan Am/Parapan Am Games with a designated “Host First Nation” — the Mississaugas of the New Credit First Nation.

Throughout the Games, many of the ceremonies have featured elements of First Nations culture.