‘It bothers me when these kids don’t have what they need,’ says Bilodeau

For Tristan Lessard, making it to the Paralympics for basketball is a personal dream.

The 13-year-old has scoliosis and spina bifida. He is in a wheelchair but has no problem shooting a ball into a standard 10-feet high basketball net.

“It’s all about strategy,” Lessard said.

“There are special techniques, special ways to dribble. Of course you can’t use your feet to shoot. But the chair is your legs, so you gotta push. Just like you would if you would walk, it’s the same.”

Lessard says the services at the MAB-Mackay Rehabilitation Centre have helped him and he was excited to learn that two-time Olympic gold medalist, Alexandre Bilodeau, is backing the centre.

“It bothers me when these kids don’t have what they need to be socially integrated,” says Bilodeau.

“Sports is a way of getting them socially integrated.”

Helping to raise $1 million for MacKay’s adapted sports programs is a personal goal for Bilodeau.

His older brother Frédéric was diagnosed with cerebral palsy when he was a toddler. Seven years ago, Bilodeau and his family realized that Frédéric wasn’t going to be able to ski with them anymore because his feet weren’t straight enough to fit in his boots.

Bilodeau says his brother was the only one who accepted the reality with ease. 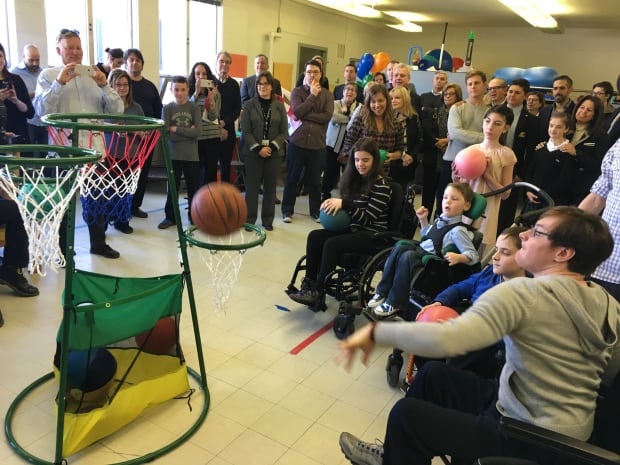 “His reaction was ‘You know what, I got a Playstation game to finish. Just go ski the four of you guys together,'” Bilodeau said.

The Rossy Family Foundation also joined the initiative. It has offered to match all donations up to $500,000 and so far Bilodeau says the fund has reached 92 per cent of its goal.