The Toronto Raptors are headed to the third round of the NBA playoffs for the first time. But you knew that. Here are the less-well-known numbers you need to know heading into the Eastern Conference Finals showdown with LeBron James and the Cleveland Cavaliers.

Here’s how the season series between these two teams went down:

Glass-half-empty take: The home team won each time, and the Cavs, with one more win in the regular-season, get home-court advantage.

Glass-half-full take: The Raptors won the season series 2-1, so you can DEFINITELY BET THE HOUSE on a 4–2 series win at home for Toronto on Fri., May 27. That’s just math.

Putting playoff results aside for a second, these teams performed nearly identically throughout the regular season.

However, the Cavs head into this series a major betting favourite not just because of the home-court advantage, but also because of the way they’ve played since the start of the post-season.

Cleveland has been on fire. That 120.6 points per 100 possessions is 6.1 points better than the Golden State Warriors, who led the league this season in just about every offensive metric.

Meanwhile, Toronto’s offence has gone into the tank for stretches while its defence has tightened things up a notch from the regular season.

On paper, though, a bit of a mismatch.

Jonas Valanciunas is out for game one on Tuesday and doubtful for game two, but it should be noted: In the one game Toronto played Cleveland without their starting centre this regular season, Bismack Biyombo started in the middle and put up 11 points and 12 rebounds in 33 minutes.

In that one game, the Cavs shot well enough from outside to keep the score close, but floundered down low. They shot just 40 percent in the immediate basket area, compared to their season-long number of 58 percent. 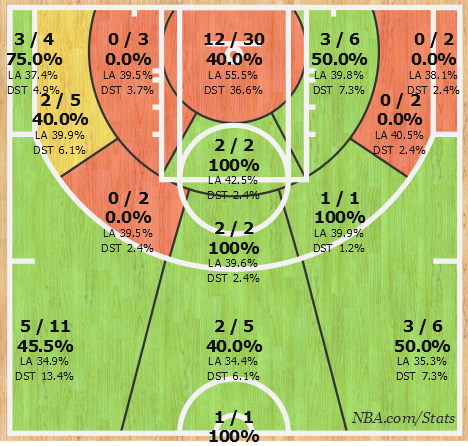 Word to your moms, he came to drop Biyombs

Through two rounds of the playoffs Bismack Biyombo has racked up 125 rebounds. That puts him second in the playoffs behind only Mason Plumlee’s 130. (In third in the stat? Jonas Valanciunas, who gathered 121 rebounds in 10 games before bowing out of the second round due to injury.)

The Cavs beat the Atlanta Hawks to end their second-round series on Sunday, May 8. That gives them eight full days’ worth of rest between the end of one series and the beginning of the next. They didn’t have that much rest over the all-star break, when they had seven days. (For what it’s worth, on seven days’ rest this season they were 1-0.)

If there’s a stupider narrative in sports this year, it’s not readily apparent: LeBron has taken a ton of flack for his flagging outside shooting, leading to a lot of “What’s wrong with LeBron?”/”Is LeBron DONE?!” type conversations, but let’s look for a second at how exactly his game has changed.

While he’s certainly been no Steph Curry from three, the bottoming out of his shot happened in last year’s playoffs—when he was still pretty damn effective. He’s actually hitting 1.5 threes per game so far, and he’s not someone the Raptors will feel comfortable leaving wide open.

In short, the three-point shooting dip isn’t nearly as drastic as people have been making it out to be, and it hasn’t hurt his production.

The real story as far as LeBron’s concerned is how much lighter a load he has had to play in eight games so far compared to last year. He’s playing a low-for-him 39 minutes per game, and his usage rate is sub-30 percent compared to an NBA-high 37.1 last year.

Meanwhile, Kevin Love and Kyrie Irving have both seen their usage rates rise significantly from last year. Love’s rate is up to 26.6 from 23.5, and Irving’s is at 27.9, up from from 23.0. And the Cavs have been rewarded with superb production, as the two are combining for 45 points and seven threes per game.

Forty-five points and seven threes? Sounds like a single game for a rejuvenated Kyle Lowry. (Hey-o!) While that’s a slight exaggeration, Lowry did hit for 36 and 35 points in games six and seven against the Heat. And it’s not just a two-game hot streak. In his last five games, he’s shooting .441 from the field and .486 from three to the tune of 27.8 points per. And for the time being, anyway, he’s put his early-playoffs slump behind him.

In fact, the team’s improvement offensively from series one to series two should be a major source of optimism heading into the Cavs’ series.

The Raptors have lost both game ones they’ve played this season and came back to win both series, so by no means is Tuesday’s contest a must-win. But it would still go a long way for the underdog Raptors put up a good fight on one day of rest in Cleveland.

For the record, here’s the trend Lowry in particular is trying to buck:

That’s not so good, Al. But the Raptors will hope game-one jitters are behind him—and DeRozan, who likewise hasn’t performed in series openers but whose splits aren’t quite as drastic—against a Cavs team unlikely to offer a lot of mulligans.