For more than 57 minutes on Thursday evening Team Canada’s run of perfection was threatened for the very first time.

“Just crazy the way everything worked out,” Sidney Crosby said.

It took two goals in just over two minutes time at the end of regulation, including Brad Marchand’s short-handed game-winner for Canada to erase all doubt. The end result was a second straight World Cup of Hockey crown, third straight best-on-best title and 16th consecutive victory under such circumstance.

The overwhelming favourites delivered with only the slightest bit of tension. The Europeans put up the biggest fight at the World Cup, squeezing the Canadians tightly over two games. Other than that, it was destiny realized for a squad that has not lost when the best play the best since the preliminary round of the 2010 Olympics.

“You start these tournaments all the time and they’re always saying ‘OK, this team’s good and that team’s good’. You know in the end you’ve got to deliver and you can say anything you want about the game tonight, but we delivered,” head coach Mike Babcock said after the 2-1 triumph and sweep of Europe in the best-of-three final. 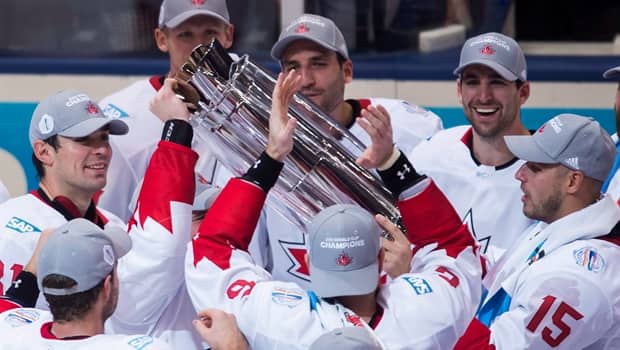 If still the best team by a good margin, this group never really seemed to reach a full-out sprint, perhaps a result of the tournament’s uncomfortable September start time. This wasn’t quite the display of domination of two years earlier at the Sochi Olympics, in which Canada gave up three goals all tournament and held the puck almost without exception.

Still, the Canadians were pretty good in Toronto and a whole lot better than the rest.

“It’s a fine line,” Babcock said. “The perception is that we’re miles better than everyone else. I think our country’s deeper, but you only get to play five guys at a time.”

The Canadians were stymied by the Europeans’ smart, responsible style in the final. They struggled at times to establish a big, heavy presence in the offensive zone and needed Carey Price to save the day more than usual.

Zdeno Chara beat him six-plus minutes into the first period on Thursday night and from there Price turned everything else Europe could muster aside. The 29-year-old’s stop of Marian Hossa on a power play preceded Marchand’s short-handed game-winner by 25 seconds. He made 32 saves in all, including a perfect 21 for 21 over the final two frames.

Just months from his Conn Smythe-winning performance for the Stanley Cup champion Pittsburgh Penguins, Crosby was the biggest difference maker for the Canadians, his hands all over Canada’s undefeated run. The Canadian captain finished with three goals and seven assists and was later named tournament MVP. 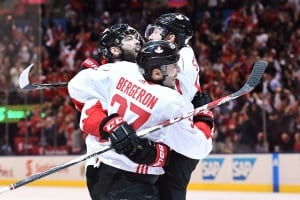 Crosby meshed perfectly with Marchand and Patrice Bergeron, the trio combining for 12 goals in the tournament, led by Marchand who had five including the tournament-clincher.

Players talked throughout September about the pressure that comes with playing for Team Canada, an ever-present expectation of delivering on the big stage. No one talked about it the room though, Steven Stamkos said at one point.

“It’s just go out there and win the next game that we play,” Stamkos said. “I think that stems obviously from the coaching staff and the way they approach our meetings, our practices, our pre-game skates leading up to the games. It’s pretty easy to go out there and just do what you’re told and do your job and know that if we play our way that things are usually going to go our way.”

Consider the case of Claude Giroux, who not only would have found a spot on every other team at the World Cup, but played a major role. On Canada he was the 13th forward. Even the absence of Duncan Keith, Jamie Benn as well as his Dallas Stars running mate Tyler Seguin did little to slow Canada’s run to another crown.

When Babcock’s coaching credentials (which now include victory in basically everything) were raised at one point he pointed straight to the nation’s rich pool of talent.