Canada captured its first medal of the FINA world short-course swimming championships Tuesday — then had its second medal unceremoniously snatched away.

Taylor Ruck, a 16-year-old from Kelowna, B.C., raced to bronze in the 200-metre freestyle to kick off what had all the makings of a great day for Canada’s talented young swim team.

But the women’s 4×100 freestyle relay of Sandrine Mainville, Alexia Zevnik, Michelle Williams and Penny Oleksiak was disqualified moments after what they thought was a silver-medal performance.

“Obviously things like that are a huge disappointment but you have to kind of look at it as something completely out of our control, and the only thing we can do is move forward from that,” Williams said. “It’s Day 1, there’s five more days of racing to go, and so it will even motivate us more to get back on the podium again.

“We’re still second in the morning and we know that.” 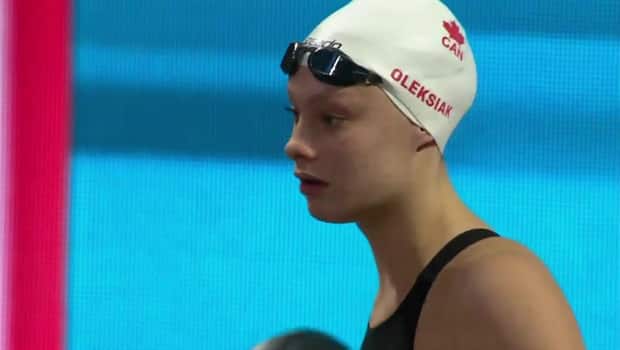 The issue was the order in which they swam. The swimmers were instructed by coaches to swim in one order. A Swimming Canada official handed in another order to meet officials, which became an instant disqualification.

The swimmers, visibly angry, initially walked through the interview area without speaking to reporters.

At the opposite end of the emotional spectrum, Ruck was ecstatic after her bronze medal swim.

“It’s just amazing,” she said. “I didn’t even come to this meet expecting to place in finals, and all of a sudden third in finals, so I’m just really happy with how I did.”

Ruck, who won a pair of relay bronze medals in her Olympic debut in Rio, touched the wall in one minute 52.50 seconds. Italy’s Federica Pellegrini won the gold in 1:51.73, while Katinka Hosszu of Hungary claimed silver in 1:52.28.

The relay disqualification spoiled the meet debut of Oleksiak, who became a household name with her stunning four-medal performance in Rio. Swimming last on Tuesday night, the Toronto native roared back from third place to put her team into the silver position.

Canadian women won six medals in Rio, and Ruck said it’s been a whirlwind for the young swimmers.

Atkinson said the heartbroken relay swimmers will rebound this week.

“People were upset, and they have every right to be. And we have to make sure we don’t make any more mistakes,” he said. “It’s not a good situation, but they are a strong group, they’re a strong team, they’ve worked together for the highs and lows of things that happen in sport, and they will bounce back.

“This is Day 1 of the six-day world championships, and they’re going to come back from this and show everybody what they can do in other events.”

The Day 1 results, even with the disqualification, bode well for the Canadian team.

Kylie Masse of Windsor was the fastest qualifier from Tuesday night’s semifinals of the 100 backstroke. She’d posted a Canadian-record time of 56.02 in the heats earlier in the day.

Masse raced to a surprise bronze in the event last summer in Rio.

“Being one of my first international competitions, the Olympics, knowing that you don’t put limits on yourself and do what you’ve been working on in training, it will get you to the sky,” Masse said.

“That’s our hope, to try to inspire the youth,” Masse said. “I know when I was younger, I always looked up to and cherished the opportunity to watch higher-level athletes, or even get a picture with them. They inspired me to keep going and move forward in swimming, so I hope to do the same for the younger kids now.”

The swim meet is being held at the WFCU Centre, normally home to the Ontario Hockey League’s Windsor Spitfires.

“I love it,” Ruck said of the venue, that featured dramatic theatre lighting. “I’ve never competed in an ice hockey rink converted to a pool so it’s just a different experience and I love it.”