Do captains really matter in sports?

From Pele to Bobby Orr, many great players have never been captains

In the playoffs the spotlight shines brightest on the sports we love. And whether things are going well or not, we often turn to the captain to help us understand why.

After all, they lead the team onto the field. They are the ones standing beside the referee during the coin flip, shaking hands prior to kickoff. And, of course, they wear a “C” on their jerseys in hockey or an armband in the case of soccer.

Most of the greats have been captains. And, in a way, we have come to associate their achievements with the position. From Wayne Gretzky to Diego Maradona to, more recently, Sidney Crosby and Lionel Messi, the captains are often the players we admire most.

And yet, there is little mention of the role of the captain in the rule books of most popular North American sports. In fact, the role, at least on paper, seems largely ceremonial. So why do we bother recognizing it in the first place?

The rules of soccer, for instance, explicitly state that when it comes to dissent “the captain of the team has no special status or privileges.” As it turns out, captains, contrary to popular belief, are like everybody else when it comes to confronting the referee. In fact, FIFA’s rule book, which is nearly 150 pages, only mentions the word “captain” three times and always in passing.

Hockey’s rule book, in contrast, does have a specific section for captains, under rule six, which gives them the right to discuss, upon the referee’s invitation, “any questions relating to interpretation of a rule which may arise during the progress of a game.” That, however, is the extent of their privilege — hardly worth the trouble of identification.

The fact is — whether discussing hockey, soccer or even the NFL, which began designating captains in 2007 — there is simply no reason for captains to be recognized on the field of play other than for ceremonial purposes.

“It’s not like the ref doesn’t discuss things with the coach anyway,” he says.

While it’s difficult to be certain, Zweig believes the NHL first began recognizing captains in the 1945-46 season. The earliest photo reference he can find of a player wearing the “C” is of Bill Durnan with the Montreal Canadiens. 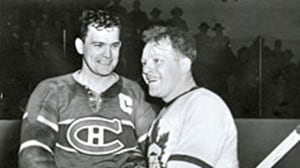 Appreciating the work off the field

None of this, however, is meant to question the importance of leadership. Julian de Guzman may be the captain of Canada’s national soccer team, but he says “wearing the armband doesn’t mean [he’s] the only leader on the team.” In fact, some of the best players, including Bobby Orr and Pele, were never captains.

The irony is that we too often fail to appreciate the work that leaders do behind the scenes. De Guzman, who also captains Ottawa Fury FC, says his main focus revolves around helping players understand what the coaching staff expects. “It’s managing different players’ views and personalities to bring everyone onto the same boat.”

But are we doing the game a disservice by limiting the captain’s role on the field of play? They are, after all, sometimes our future coaches and managers.

Rugby, for example, doesn’t identify its captains and yet they’re pivotal to the outcome. While the coach may run the practice, says John Billingsley, a lifelong enthusiast and former national team player, “what’s important is the 80 minutes of play — that’s the battle, that’s the war.”

And since the coach sits in the stands during the match, captains have genuine responsibility beyond gamesmanship or liaising with the ref to clarify calls. It means that, without the aid of electronic communication, they must make game-changing decisions.

“That’s why the strong teams, like the All Blacks, will always have strong captains,” says Billingsley. “Because during the battle, when things might go awry, you need leadership to be able to change course on the spot. And you can’t have that unless you prepare a leader, someone with the ability to look into the eyes of the other players and say I need you now.”