How the US Election Played Out on Social, and the Role of Social Platforms in the News Cycle

In what it’s safe to say was one of the most surprising US Election results in history, Donald Trump has defeated Hillary Clinton to become the 45th President of the United States.

Considered by many poll watchers and pundits to have had no chance at victory, Trump’s message of political change and fighting for the masses resonated with more than 58 million Americans. And whether you agree the outcome or not, it’s clear that social media, in particular, paid a significant part in Trump’s rise to power.

The actual part the media has played in the process will be debated for years to come, but it’s interesting to look at the basic outline of what the new media landscape means for the electoral process and how it played out across the various platforms.

The biggest point of contention to come out of the 2016 Presidential Election race will no doubt be the role that the social media ‘echo-chamber effect’ has on people’s perspectives. Many people can’t understand how Trump could possible gain so much support, given the breadth of coverage about his various failings and extreme views. But when you consider that more Americans than ever now get their news via Facebook – some 63% according to Pew Research– and that Facebook’s News Feed algorithm shows people content they’re more likely to Like and engage with, it’s not a stretch to imagine that such a process could have a significant impact on political perception.

This was highlighted by a project called “Red Feed, Blue Feed” conducted by The Wall Street Journal. In order to provide perspective on how Facebook’s algorithm can alter or reinforce political viewpoints, WSJ created two Facebook feeds – one which showed articles shared by sources classified as “very conservatively aligned” and another shared by “very liberal” sources. In essence, the aim was to highlight that depending on your political leanings, the content you get shown on Facebook can be vastly different – here’s an example under the newly added topic of “President Trump”.

While you only ever see your own curated Facebook or Twitter feed, it can be hard to understand how anyone’s opinion is different to what you’re seeing. This experiment shows just how significant that experience can be, and how, dependent on your activity, Facebook can dramatically reinforce your own viewpoint – even Mark Zuckerberg’s sister has (indirectly) raised concerns about such impacts.

We’ve written about this before on SMT, the fact that how our thoughts and opinions are influenced in the new media landscape is important to understand, and definitely, it seems likely that this is going to become a key area of focus in the wash-up from the election campaign. But on the actual election result, how did the pundits get the result so wrong?

Last month, I wrote a post which looked at whether we could use social media data to predict the outcome of the election. In that post, I noted that several academic studies into using social media conversation for this purpose found that it wasn’t sentiment or follower growth that proved the most indicative measure, it was share of voice that actually had the strongest correlation with the final result.

Given Trump’s pre-existing media profile, and the large amount of anti-Trump tweets in this election cycle, I wasn’t sure this measure could be used effectively this time around. Turns out it could – as per Twitter data, Trump dominated the tweet conversation – and that, ultimately, proved the best indicator, as Clinton was actually leading in both overall sentiment and follower growth in the final weeks.

As noted, this correlates with the findings of researchers from the Dublin City University and others from Germany, and also proved indicative in the recent election of Justin Trudeau in Canada.

As noted in the research:

“The mere number of tweets reflects voter preferences and comes close to traditional election polls, while the sentiment of Twitter messages closely corresponds to political programs, candidate profiles, and evidence from the media coverage of the campaign trail.”

There’s obviously a lot to dissect and analyze in addition to this, but it seems that despite the aforementioned concerns about external factors skewing the data – like Trump’s celebrity status – it may be worth noting Twitter share of voice in future predictive models.

Also interesting to note here: One of the big criticisms of this stat is that a huge amount of pro-Trump content was generated by bots – in fact, research from the University of Southern California found that there were millions of election-related tweets posted by more than 400,000 social bots during the campaign. Their research also found that many of these shared highly positive messages about either candidate, which may actually have influenced voter outcomes by creating “the false impression that there’s grassroots, positive, sustained support for a certain candidate”. So while bot traffic no doubt contributed to the overall share of voice stats, it may actually have been beneficial, even if it was coming non-human operators.

And then there’s the actual social activity itself – the amount of people tweeting or posting about the election on social obviously has an impact on wider overall perception, and thus the result. The data shows that people have sent more than a billion election-related tweets since the primary debates began in August last year, while Facebook traffic increased by 30% – and Twitter traffic doubled – on election night. 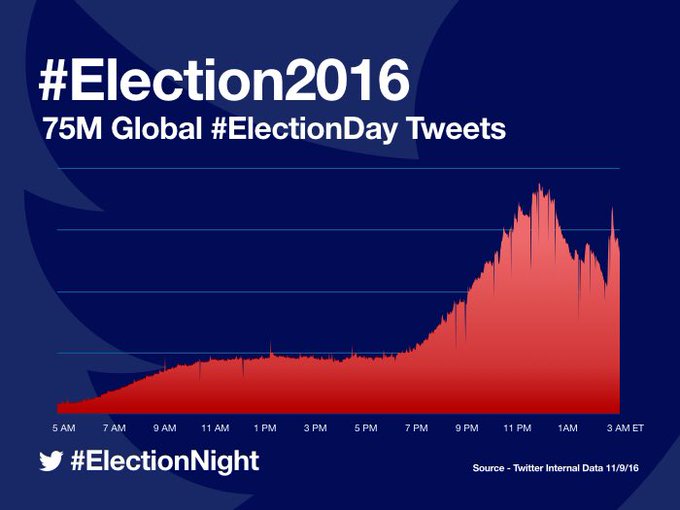 It’s safe to say social media has become the place to discuss and get information about politics, and is where many of us are seeing our perspectives shaped. The data also shows that Twitter, for all its troubles, remains a key source for such discussion – in fact, Twitter stock rose on news of a Trump victory, one of the few shares to see an increase after the outcome.

As highlighted above, there were 75 million tweets sent on election day, more than double the previous election day record of 31 million set back in 2012. Given Twitter’s prominence in this regard, it’s hard to fathom why the platform hasn’t been able to leverage their position as a key real-time communications platform into a more lucrative business model, but the numbers show that Twitter is still very much alive, and very much embedded into our wider interactive process.

As noted, the role social media has played in the US Presidential Election race is going to be dissected and debated for some time to come, with the echo-chamber effect looking set to get the most focus. And it’s a serious concern – as highlighted by the above figures, social platforms are very much crucial to how we connect and communicate, and thus, they’re also highly influential and can play a big role in shaping our opinions. And because those networks also incentivize engagement, it’s actually to the benefit of publishers to write more divisive headlines, to provide more controversial takes that’ll generate clicks, comments and shares, which, in turn, may be fueling greater societal divide in general.

And as more social networks move to algorithm-defined models, there’s a very real issue with confirmation bias, of people being shown more content that aligns with their pre-existing beliefs, as opposed to more diverse perspectives.

To what extent that’s had an impact, that’ll be down to more in-depth academic research – but even if it is found to be a key issue, how do you fix it?

These are the questions that’ll be posed in the wash-out from the most amazing Presidential campaign of our time.