MONTREAL – They made us wait, but it was well worth it.

In one of the most exciting and entertaining Major League Soccer playoff games in recent memory, the Montreal Impact earned a 3-2 decision over Toronto FC on Tuesday night in the first leg of the Eastern Conference semifinals.

The sellout crowd of 61,004 fans at Olympic Stadium erupted after goals by the Impact’s Dominic Oduro, Matteo Mancosu and Ambroise Oyongo, blowing the roof off the decrepit, old building with the sheer volume of noise they created.

But their celebrations ended up being somewhat muted when Toronto’s Jozy Altidore and Michael Bradley notched second-half goals after the visitors went down 3-0 shortly after the halftime break. Those goals were huge for TFC, as they only need to win 1-0 when they host the decisive return match in this aggregate series next Wednesday at BMO Field.

No doubt disappointed with squandering a three-goal lead, the Impact still control this series, needing only a draw in Toronto to become the first Canadian team to advance to the MLS Cup in league history.

It was an amazing comeback by Toronto, but coach Greg Vanney wouldn’t accept any kind of congratulations after the game.

“There’s still a lot of soccer left to be played, but our guys should feel good about how they got themselves back into this because it wasn’t looking good there for a bit,” Vanney admitted.

“We were in third or fourth gear. We weren’t at the speed we wanted to be at. We were moving forward when the game had already transitioned and was moving the other way. So, we kept finding ourselves on the wrong end of the game,” Vanney offered.

In an embarrassing gaffe for the Impact organization, kickoff was delayed 30 minutes after the referee noticed during his pre-game inspection that the lines of both penalty boxes were not correctly painted on the pitch. The grounds crew misjudged by a good three yards on either side, thus making the boxes too narrow, which meant the old lines had to be darkened out, and new lines painted on. Epic fail, as the kids are fond of saying. 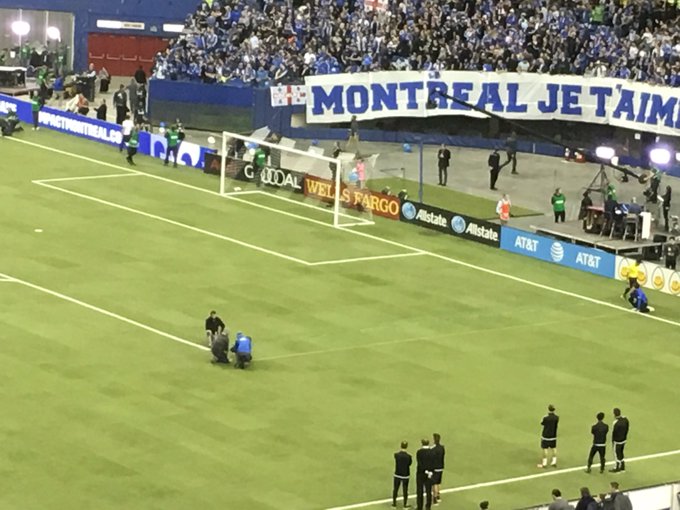 It looks like they misjudged the lines by three yards on either side. Repainting them now. I’m not making this up. #TFC #IMFC

“The guys were buzzing and ready to go. It’s the biggest game of the year for many guys and all of a sudden you find out you’re going to have a 20- to 30-minute delay. It’s a challenge for the players. It breaks your rhythm. It was hard,” Vanney said.

There were no surprises in either lineup: Toronto went with the exact same starting 11 for the fifth straight game, Montreal for the fourth.

Vanney talked in the buildup to this game about the Impact’s dangerous counter-attack, and how they use their speed in transition to unnerve opponents. The Reds knew all about it, but they could do very little about it on this night, often struggling to contain the home side, especially Oduro and Ignacio Piatti out wide beneath Toronto’s two wingbacks Steven Beitashour and Justin Morrow.

It took Montreal only 10 minutes to open the scoring. Canadian Patrice Bernier quickly pivoted and delivered a gorgeous no-look pass down the right side that handcuffed Toronto defender Eriq Zavaleta. Oduro slipped in behind, latched onto Bernier’s through ball and then coolly slotted his shot past goalkeeper Clint Irwin and inside the far post. Oduro’s goal snapped TFC’s 207-minute run of not allowing a goal in the playoffs.

Two minutes later, Montreal doubled its advantage. Beitashour’s headed clearance into the middle of the field proved an unwise choice, as Oduro picked it off and played a ball over the top for Piatti. The Argentine burst into the penalty area and played a low pass across the box, where Mancosu slotted it home after easily ghosting past two TFC defenders.

Toronto looked far more settled to start the second half, hemming the Impact deep inside their end of the field with lengthy stretches of possession. But TFC turned off after giving away the ball in the centre of the park in the 53rd minute, allowing the Impact to wreak havoc in transition. Oyongo went on a lengthy, dribbling run without being challenged that ended with the Montreal defender lashing a powerful shot past a diving Irwin.

Desperately needing to change things up, Vanney made a double substitution in the 57th minute when he replaced Jonathan Osorio and Armando Copper with Will Johnson and Tosaint Ricketts. He also changed from a 3-5-2 formation to a 4-3-3 setup, with Ricketts up front alongside Altidore and Sebastian Giovinco.

The personnel and tactical switch was the turning point, providing Toronto more defensive solidity, more options in attack, and giving them a stranglehold on the proceedings.

“It was a big factor. Tosaint gives us incredible pace, to run in behind and to force the opposition’s back line to consider the space behind them,” explained Vanney, who felt the Canadian added some much-needed energy and linked up well with Altidore and Giovinco.

Vanney added: “We put Will in to steady the defensive side of things because we were going to an all-out attack with the front three guys. … We were able to put some things together at that point.”

The Reds valiantly fought back, and earned a lifeline in the 68th minute when a goal-mouth scramble ended with Altidore scoring on a powerful header from six yards out. Five minutes later, Bradley slammed a shot from inside the box past a helpless Evan Bush inside the Impact goal after a bit of sustained possession by Toronto.

“It was edge-of-your-seat stuff. A little bit too much for me sometimes, but I hope that the fans were at least entertained,” Vanney said of the game.

NOTES: TFC and the Impact split the regular-season series, with one win apiece and a draw… The Colorado Rapids play the Seattle Sounders in the Western Conference final… MLS Cup is scheduled for Dec. 10. The team with the best regular-season record will stage the final. If Colorado beats Seattle, it will host regardless of who wins the East. Toronto would host if Seattle wins the West. Montreal is the No. 4 seed, and thus can’t stage the final.