Influencer Marketing on Social Media: Everything You Need To Know

You probably know that word-of-mouth is one of the most valuable forms of marketing out there: It’s been shown to influence 20 to 50 percent of all purchasing decisions. After all, potential customers are much more likely to be receptive to recommendations from a person they respect and trust than to ads or other corporate messaging.

In the new world of digital relationships, word of mouth extends well beyond recommendations from friends and family into the realm of influencer marketing.

In fact, research from Twitter shows that 49 percent of consumers seek purchase guidance from social media influencers, and 20 percent said that a Tweet from an influencer inspired them to share their own product recommendation. Even more important for marketers, nearly 40 percent of Twitter users said they had made a purchase as a direct result of an influencer’s Tweet.

What is a social media influencer?

In fact, a survey of U.S. teens conducted for Variety last year found that YouTube creators took eight of the top 10 spots in a survey of influencers, outranking traditional celebrities like musicians and movie stars.

Perhaps no one embodies the concept of the social media influencer more than DJ Khaled, whom The Washington Post dubbed “The King of Snapchat.” His 6 million Snapchat followers make him an obvious choice for brands who may not (yet) have a strong Snapchat presence of their own.

When the Las Vegas Convention and Visitors Authority debuted on the social network, they hired DJ Khaled for an account takeover that brought in more than 350,000 views in its first two days alone. 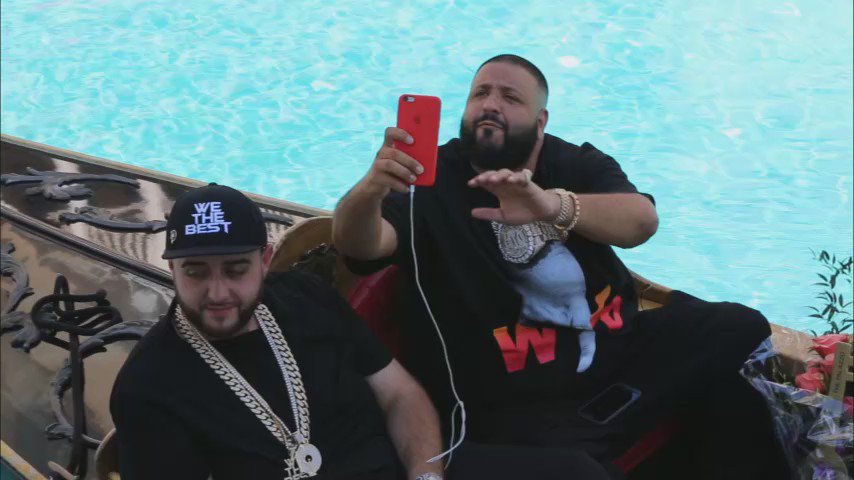 Right now @djkhaled is snapping his ride on a gondola @VenetianVegas

It’s going down on Snapchat

How to incorporate influencer marketing in your social media strategy

Think of influencer marketing as simply another arrow in your marketing quiver. While it’s a different approach to brand messaging, your influencer campaigns should still align with your larger content strategy and brand image so that they enhance your overall brand reputation.

Extend your reach (or laser-target your message) through influencer channels

In many cases, you will use influencer marketing to extend the reach of your brand messaging by working with social media influencers to create or support content they post on their own social media channels. This allows you to piggyback on someone else’s follower base, either to reach a broader audience or to segment your efforts in ways that would never be possible through your own branded social media accounts.

For example, the National Pork Board has partnered with Latino social media influencers in its #sabrososmomentos campaign to encourage Hispanic American families to serve more pork at family get-togethers throughout the holiday season, targeting a specific segment it would be challenging to reach through the board’s own branded channels.

This video, posted by influencers Los Pichy Boys on October 18, already has more than 340,000 views.

Boost credibility with influencer messaging on your own channels

You can also recruit influencers to participate in content that you share or cross-post on your own channels, as clothing company ThreadBeast did when it created a series of Facebook Ads with streetwear influencers like Nightwing2303 unboxing ThreadBeast packages.

Check out the views on that Facebook video: 3.4 million! Plus, it garnered another 200,000 views on Nightwing2303’s YouTube channel. The campaign targeted 18- to 24-year-old men in the U.S. with an interest in hip-hop or streetwear brands, and resulted in a 36 percent increase in clickthrough rate.

A social media takeover, like the DJ Khaled example above, is another effective way to leverage an influencer’s following and cross-promote your own channels to build up your own follower base.

How to find the right social media influencer for your campaign

Before reaching out to a potential social media influencer, you’ll need to consider the Rs of influence:

When determining whether an influencer is a good match for your three Rs, you’ll need to ask yourself a couple of important questions.

Who are you trying to influence?

Most marketers have no trouble coming up with a high-level answer to this question: you’re trying to influence your customers, prospects, and the broader industry community. But your influencer campaign can’t be all things to all people: as in all types of marketing strategy, a meaningful answer requires greater focus and a clear understanding of your goals and your audience.

Perhaps you’re trying to influence people who work in a specific job function—social media professionals or community managers who tend to spend significant amounts of time on social media every day, for example. Or maybe your goal is to influence decision-makers in a particular vertical—maybe government or finance leaders who tend to place deep trust in recommendations from their peer network. Or, you could be trying to target a specific consumer segment, like millennials looking to buy their first home.

These are three very different groups, and an effective influencer marketing strategy requires you to speak to the right people using the right tools (and, in this case, the right influencers), just like you do in all of your other marketing work.

Looking at a very specific marketing niche, for example, a recent survey from public relations firm MWWPR found that influencer marketing is the most effective way of marketing spirits to millennials, along with earned media. According to the report, 54 percent of Millennials share branded content from spirits companies when it is posted by a social influencer, and 93 percent usually try a new liquor after someone recommends it to them. For any liquor brand looking to expand into the millennial market, those numbers should be hard to ignore.

Who do your customers, prospects, and community trust?

For marketers, the key requirement for true influence is trust. Your audience must trust and respect the opinion of the influencers you partner with. Without the trust component, any lift in results will be superficial and you’ll struggle to see a tangible business impact from your efforts.

Working from a clear idea of exactly who you’re trying to influence, take the extra step to find key opinion and thought leaders whom your audience already looks to as sources of meaningful information. These people are already influencers—and partnerships with them can drive real impact.

Keep in mind that your audience demographics play a major role in determining which influencers will be the most trusted in your marketplace. Data from Twitter shows that people aged 45 and up view more traditional household name celebrities as preferred influencers, while millennials prefer digital content creators.

Targeting that millennial market, Contiki has been using influencer marketing for five years through its #RoadTrip series, hosting groups of YouTube stars as they follow Contiki itineraries around the world. Some videos, like the one below created by influencers Jesse and Jeana (BFvsGF), racked up more than a million views (not to mention more than 125,000 likes).

Perhaps it’s no surprise, then, that after its 2015 RoadTrip to Southeast Asia, Contiki saw a 175 percent increase in owned YouTube audience and a 25 percent increase in traffic to its Asian trip packages online. Anecdotally, when Contiki’s Canadian sales managers visited various campuses across the country, they heard from at least one person each day who mentioned they had first learned about the travel brand through their favorite YouTuber. The campaign helped Contiki win the Skifties award for Best Travel Brand on YouTube and the British Youth Travel Award for Best Use of Social Media.

There are plenty of tools to help you identify people with large and engaged networks talking about topics that matter to your audience, including followerwonk, Traackr, Klout, and Hootsuite. But remember that reach alone does not indicate a powerful influencer—you also need the other two Rs: relevance and resonance. Watch for engaged followers—that means plenty of views, likes, comments, and shares, all from the precise follower segments you’re trying to reach.

A huge follower count is meaningless without evidence that those followers are paying attention, and a smaller follower count can be very powerful if it’s a niche area and the potential influencer is a recognized leader. Markerly, a network that connects brands with influencers, recently found that partnering with “micro-influencers” can provide much better ROI than trying to snag a big celebrity. Their analysis of 800,000 Instagram users found that the  influencers with 10,000 to 100,000 followers offer the best combination of resonance and reach.

Influencers are becoming increasingly important in the social media world, and they expect to be recognized for the value they bring to your brand. Here are some key ways to ensure you build influencer relationships that are beneficial over the long term.

Once you identify a social media influencer you want to engage with, start the connection process by reaching out through content they are already sharing, and conversations they are already starting or leading. Twitter chats are a great way to do this. If you know your potential social media influencer is hosting a Twitter chat, be sure to mark the date and participate. If they have a blog, comment on their blog posts to show that you are actually reading their content.

Once you’ve begun to build rapport, the relationship can bloom into a mutually beneficial one. On that note…

As a marketer, you’re probably focused on the value that influencers can provide to your brand, not the other way around. But to create a meaningful and lasting relationship, influencers must also derive value from partnering with your brand—and not just in the form of cold, hard cash (although that always helps).

“Value” doesn’t only mean financial compensation; it simply means that the perceived benefit of the partnership is equally important to both you and the influencer. It could involve a content swap, an introduction to a unique community, or some kind of swag or product placement, but always keep in mind that mutual value will be the key driver of long-term influencer relationships.

Go for a consistent look, feel, and tone

When choosing an influencer, in addition to finding a fit for your niche market, you need to find someone who’s producing content with a similar look and feel to your own, and whose tone is appropriate for the way you want to present your brand to potential customers. This will make it much easier for the brand and the influencer to share, swap, and collaborate without creating a disjointed feel in either party’s social media posts.

A social media influencer who has worked hard to build a following will not accept a deal that makes their own personal brand seem inconsistent. And allowing the influencer creative freedom is much easier when you know that their content will gel with your own. Combining your efforts creates the best results—data from Twitter shows that exposure to a brand Tweet creates a 2.7 times lift in purchase intent, but exposure to both a brand Tweet and an influencer Tweet more than doubles that lift to 5.2 times.

Social media influencers should be able to provide analytics and detailed reports on the reach of their posts, but remember that you’re also looking to track engagement. This can be tricky, with 47 percent of respondents to a recent survey saying that proving the value of their influencer marketing campaigns is their biggest measurement challenge. Hootsuite allows you to measure campaign success by tracking mentions of the brand or campaign hashtags with social listening streams.

Remember that influencer marketing is one of the hottest online marketing trends right now, but you still need to do your research, ensure your efforts align with your overall marketing strategy, and test and track your results to improve performance, just as you would with any other marketing tool.