Klay Thompson sets NBA record for points in under 30 minutes

The Golden State Warriors of the past three seasons are famous for setting records. They’ve won 73 games in a regular season, had Stephen Curry set virtually every three-point record imaginable, and established new standards for what it means to run a high-powered offense. It’s hard to be surprised by them anymore.

Still, what Klay Thompson did against the Indiana Pacers on Monday Night in Oakland managed to rewire a few more brains. The Warriors’ No. 3 scoring option set a new NBA season high with 60 points on 21-of-33 FG, 8-of-14 3FG, and 10-of-11 FT. That showing set a new career high for Thompson, who two seasons ago put up 52 on a night when he scored an NBA-record 37 points in a single quarter. Monday was even better for the Warriors All-Star, who started the season in a slump as the team integrated Kevin Durant into the starting lineup.

Oh, and Thompson scored those 60 points in all of 29 minutes and three seconds of court time. No player had ever scored so many points in fewer than 30 minutes of play in the shot clock era.

Yes, you read that correctly. Thompson went to the bench for good with 1:22 remaining in the third quarter and the Warriors well on their way to a 142-106 blowout win. If not for the very lopsided score, Thompson could have flirted with one of the highest-scoring performances in NBA history. Instead, he had to settle for the 66th 60-point night in NBA history, the 13th since 1994, and a smaller piece of NBA history.

It became clear very early on that Thompson was in for a big night. The Warriors exploded for 38 points in the first quarter, 17 of which came from Thompson on 8-of-12 shooting. Yet that fine showing was only the prelude to an even better second quarter in which Thompson posted 23 points on 7-of-10 shooting from the field and 4-of-7 from beyond the arc. His 40 first-half points represented exactly half of Golden State’s total at the break.

It would have been very understandable for Thompson to cool off after his time in the Warriors locker room. Instead, he started the second half just as hot with another 20 points (6-of-11 FG, 5-of-9 3FG). Up 116-83 at the half, there was no need to insert Thompson back into the game to risk injury. Perhaps head coach Steve Kerr also wanted to rest one of his key players ahead of Wednesday’s hotly anticipated matchup at the Los Angeles Clippers.

Thompson’s shot chart indicates that his record performance was not merely a matter of getting hot from three-point range: 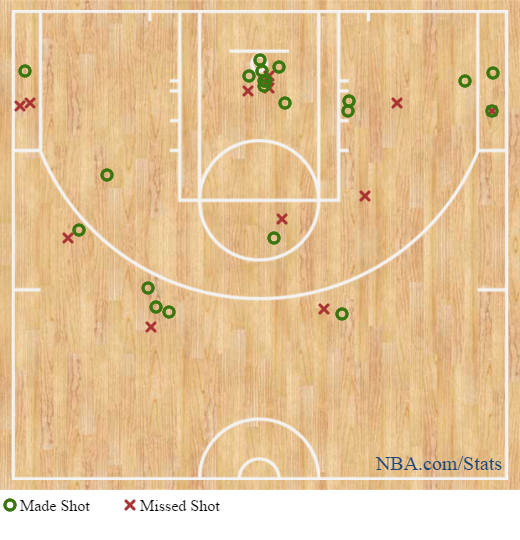 This is what Klay’s career-high 60 point shotchart looks like.

In fact, Thompson’s shooting percentages were not especially rare for a player of his talents. Instead, his excellence came more via the number and quality of his 33 shots. The Warriors regularly found Thompson in pockets of space against a Pacers defense playing the second night of a road back-to-back after besting the Clippers at Staples Center on Sunday night. His line was a triumph of the team structure and its elevation via his unique talents. Thompson was incredible, but his 60 points came within the natural flow of the offense.

One need only look at the Warriors’ team stats through those the first three quarters to get a sense of how thoroughly they decimated the Pacers. Golden State matched a franchise record with 15 assists in the first quarter and committed just one turnover in the period, insane numbers that dipped only slightly with a 10-to-1 showing in the second quarter. The Warriors doubled that first-half turnover total with two more in the third quarter, but 10 more assists in that period made it 35-to-4 entering the fourth quarter. The reserves skewed the final total with seven more turnovers, but the point was already made. The Warriors finished with at least 45 assists for the second time this season — no team since the 1992-93 Cleveland Cavaliers has put up 40 twice. And the Warriors have only played 21 games in 2016-17.

Naturally, though, Thompson’s 60 points in 29 minutes will be the stat everyone remembers from this game, just like Kobe Bryant’s 61 points in 31 minutes back in December 2005 remains a historic performance in NBA history. By stats alone, Thompson now has one of the best scoring games the league has ever seen: 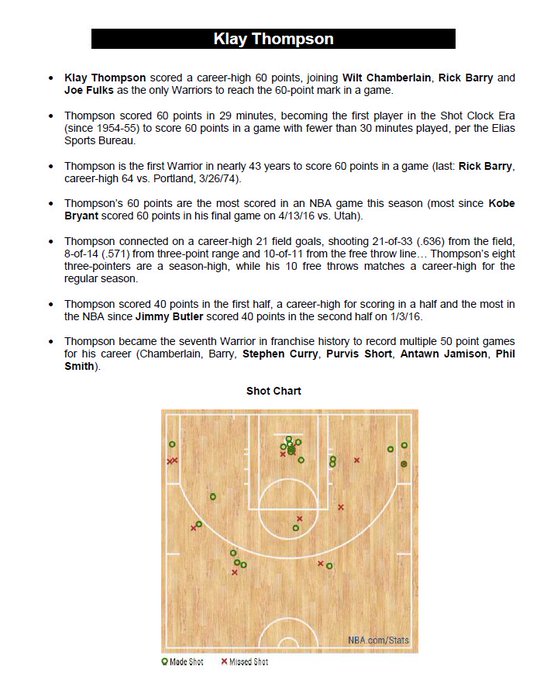 Perhaps most impressively, Thompson finished just short of the scoring pace Wilt Chamberlain set in the NBA’s only 100-point game: 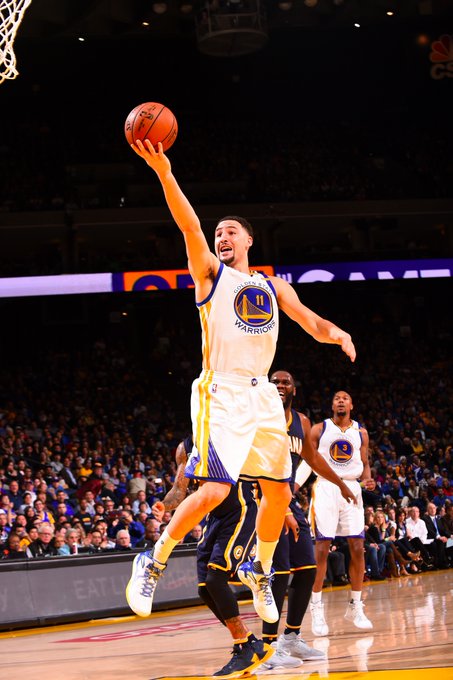 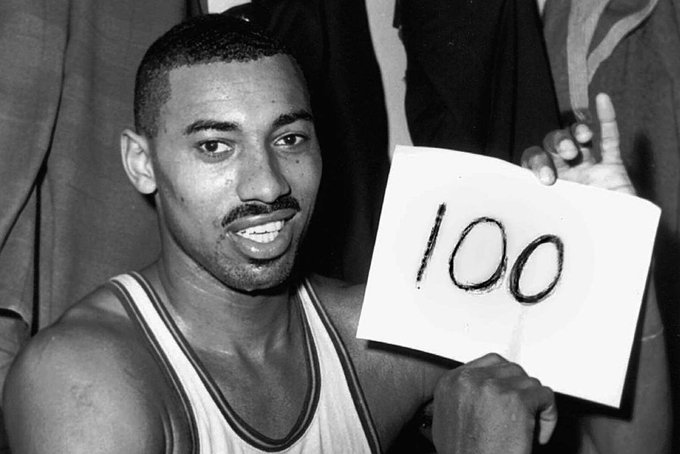 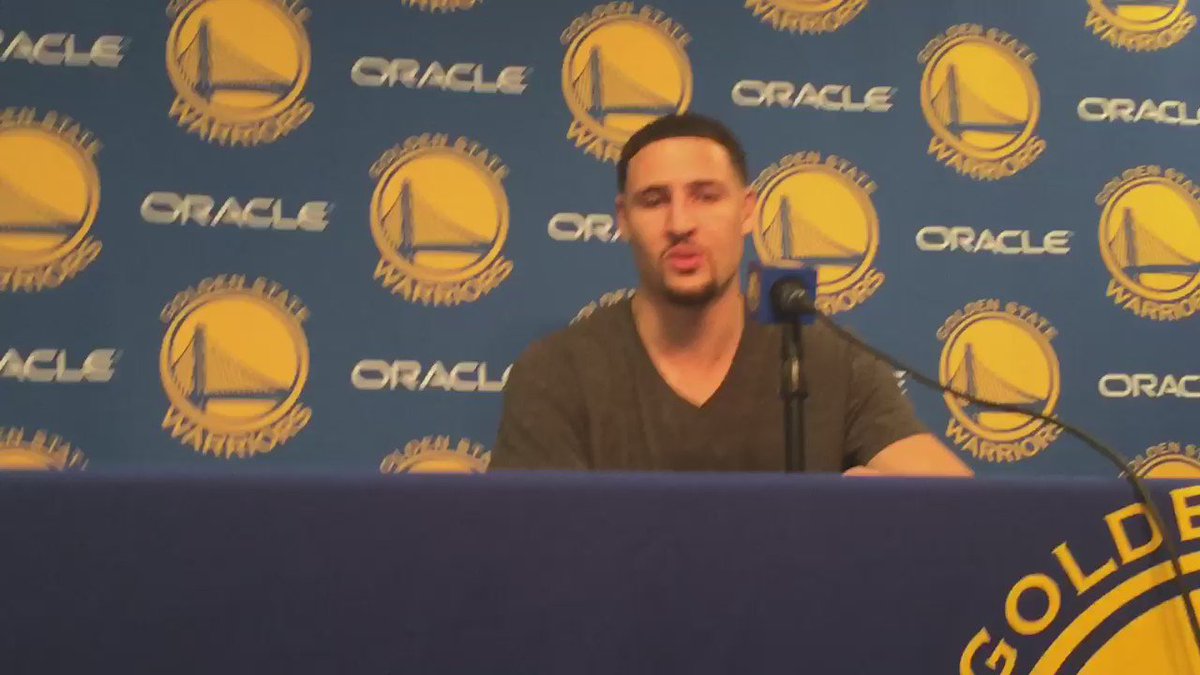 Joe Lacob presents Klay Thompson with a postgame rose.
Klay: “I’ll give this to Rocco”

Congratulations to Rocco, Klay’s dog, on his forthcoming snack.

Thompson’s 60 points will be one of the highlights of this NBA season no matter what the Warriors or anyone else accomplishes the rest of the way. What’s incredible, though, is that it feels like this star-laden squad is only getting started. The Warriors have scored 80 points in the first half twice this season, have logged 45 assists twice, and now saw their third option set a record for points in fewer than 30 minutes played. It’s hard to imagine what else they could do. But a team this loaded exists to rewrite the possibilities of the sport.