People forget that barely a year ago, Kylie Masse was watching the Pan American Games from the bleachers after failing to qualify for Canada’s team.

She was an outstanding university swimmer for the University of Toronto, but had yet to make the big jump to swimming’s international stage.

But the 20-year-old from Windsor, Ont., raced to a silver medal at the world short-course swimming championships on Wednesday, that will go nicely with the Olympic bronze she won in Rio.

And two days into the event, there are bound to be more as Penny Oleksiak of Toronto, whose four-medal performance was one of the highlights of Rio in any sport, broke her own Canadian record in the 100 freestyle in both the heats and semifinals Wednesday.

Masse felt a chill when she marched out to thundrous applause from her hometown crowd at the WFCU Centre, a hockey arena normally home to the OHL’s Windsor Spitfires.

“Being at the back [of the line marching out] and hearing everyone else go, and then it kind of erupted a bit. . . It’s nice, it’s awesome,” she said.

Masse is part of a groundswell of women’s swimming that accounted for all six of the country’s swimming medals in Rio, one more than Canada won in the previous three Summer Olympics combined.

Canada hadn’t won more than three medals at a non-boycott Olympics since 1976, and Oleksiak’s gold was Canada’s first since Mark Tewksbury in 1992.

Swimming for the University of Toronto, Masse won Canada’s university athlete of the year in both 2015 and ’16. When she missed out on the Pan Am team, she travelled instead to South Korea to race in the World University Games where she won gold, and dipped below the one-minute barrier for the first time ever.

Masse said people often don’t realize she’s so new in the sport. Just like she had to do in Rio, she paused to calm her nerves, remind herself it was just another race.

“I just kind of go through my head. . .it’s the same four lengths, just do what you’ve got to do,” she said. “I was pretty nervous before, being at home and having a lot of people here watching, but I tried to decrease that pressure as much as I could.

“I guess I’m still learning that, something to work on.”

The mixed relay medal, meanwhile, came after Canada’s women’s 4×100 freestyle relay team was disqualified on Tuesday night, and the 4×50 medley relay just missed out on the podium on Wednesday, finishing fourth.

“It’s been a couple of near misses, so to finally get on there, it feels pretty great,” said Williams, who was on all three relays. “It’s still disappointing to think back to [the disqualification]. But hey, getting on the podium, there’s nothing better than that. This motivates us for the rest of the week.”

The Canadians swam out of Lane 1 based on their slower time in the final, but they managed to turn that into an advantage. 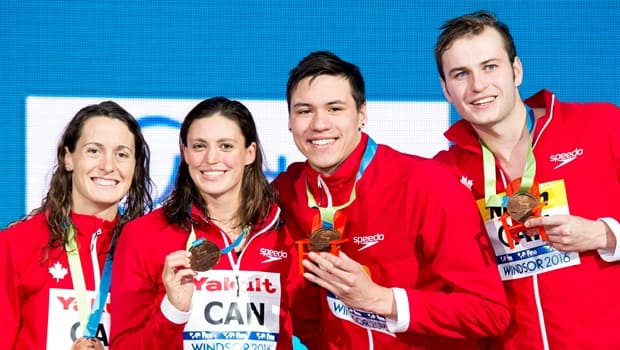 “There was no pressure on us, and I think that’s what kind of got us on the podium, we just went for it,” Williams said. “Nobody really saw us coming, and that was our advantage.”

“In a 50, you can’t really see anyways, you just put your head down and go fast,” added Mainville, who swam the anchor leg. “For us that was an advantage because the other countries didn’t know we were there.”

Oleksiak, meanwhile, broke her own Canadian record in both the heats and semifinals Wednesday, swimming 52.19 in the evening semifinals. 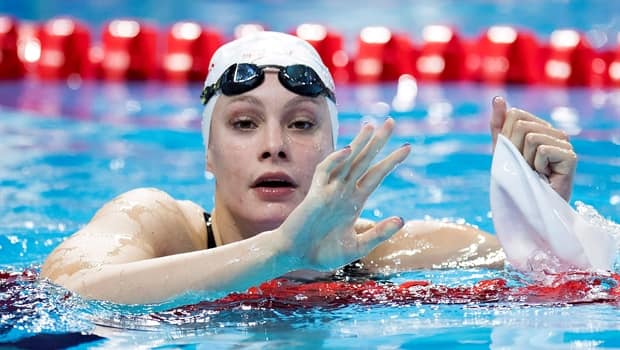 The 16-year-old, whose four-medal images will be one of the most enduring of Rio, is getting star treatment in Windsor as kids thrust pens and paper in her direction wherever she goes.

“It’s really nice and really fun,” Oleksiak said. “I feel like I should stop because I know some people don’t stop for their fans, they just kind of go through. I think about how I would feel if I saw someone I really wanted to sign something and they just walked past me. So I’m just trying to make them happy.”

When the temporary pool was constructed in the WFCU Centre, both a loonie and penny — for obvious reasons — were placed under the lining, directly in the centre of the pool

“I keep forgetting about it though, it’s so bad,” Oleksiak said. “Then someone reminds me and I think ‘Oh my goodness, there is the penny.’ Because I know that there’s the loonie but I forget about the penny.”

Masse, Oleksiak, Williams and Kelsey Wog of Regina were fourth in the 4×50 medley relay earlier in the night.

Canada has three medals in the meet’s first two days. Taylor Ruck kicked off the medal parade on Tuesday, winning bronze in the women’s 200 freestyle.