McGregor responds to Mayweather, takes shot at domestic abuse past

The fantasy fight that has woven its way into the fabric of everyday combat sports discussion has a new chapter.

“You guys keep hearing all these different rumors about different fighters want to face Floyd Mayweather,” Mayweather told ESPN’s First Take. “Everybody keeps talking about Conor McGregor. He’s blowing smoke up everybody’s ass. Dana White, the UFC, let’s make it happen. Bring him over to the boxing world and I’ll show him what it’s like.”

Mayweather and McGregor have traded verbal jabs since mid-2015 and both have stated on a number of occasions they’re interested in competing a boxing contest against one another.

“We tried to make the Conor McGregor fight,” Mayweather added. “They know what my number is. My number is a guaranteed $100 million. That was my number. We are willing to give him $15 million and then we can talk about splitting the percentage—the back end—on the pay-per-view. But of course, we’re the A side.”

Both stars are the biggest draws in their respective sports, with Mayweather earning more money than anyone in the history of boxing. McGregor is the PPV king when it comes to mixed martial arts—each of his three fights in 2016 reportedly garnered more than one million PPV buys each—and his coach John Kavanagh told The Business Post this past June the UFC champion would want a 50-50 split for any potential Mayweather fight.

McGregor responded to Mayweather the only way McGregor knows how. 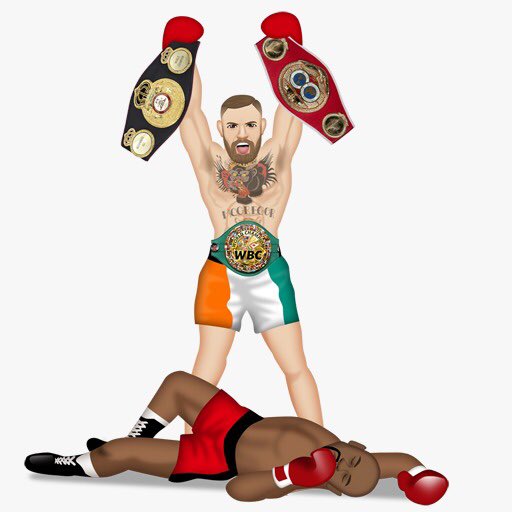 The Irishman and/or whoever helps him with his social media accounts dug deep on the reference to C.J. Watson. The NBA point guard’s name came up in connection with Mayweather back in 2013 when new details about one of Mayweather’s domestic abuse cases from 2010 emerged.

Mayweather allegedly saw a text exchange between his ex-girlfriend at the time, Josie Harris, and Watson which led to a dispute.

“All I heard is, ‘Who is C.J. Watson, C.J. Watson the basketball player?’ Harris said according to a police report. “From there it was just…bad. I was powerless. He was holding me down. I couldn’t fight back. The kids were screaming and crying, ‘You’re hurting my Mom.'”

Harris, the mother of three of Mayweather’s children, also alleged the boxer shouted: “I’m going to kill you and the man you are messing around with. I’m going to have you both disappear.”

Mayweather pled guilty to misdemeanor battery and was sentenced to 90 days in county jail and 100 hours of community service.

The 39-year-old retired in 2015 after beating Andre Berto and improving to 49-0 as a professional. He mentioned Wednesday that if he returns to boxing he wouldn’t be interested in a rematch with Manny Pacquiao—the most lucrative boxing match in the sport’s history.

“Only thing I’m probably interested in is the Conor McGregor fight,” Mayweather said. “I’m a businessman, and it makes business sense. I believe in what me and [adviser] Al Haymon talk about every day—I believe in working smarter, not harder.”

UFC president Dana White has said in the past “there’s no way in hell” a Mayweather-McGregor boxing match would ever take place because McGregor is under contract with the UFC.

Here is the exact language used in UFC contracts:

“During the Term, ZUFFA shall have the exclusive right to promote all of Fighter’s bouts and Fighter shall not participate in or render his services as a professional fighter or in any other capacity to any other mixed martial art, martial art, boxing, professional wrestling, or any other fighting competition or exhibition, except as otherwise expressly permitted by this Agreement.”

McGregor was recently issued a boxing licence by the state of California, which means he could theoretically claim protections under the Ali Act. However, until there’s movement on that front or the UFC gives McGregor consent it’s all just gum flapping.