Microsoft’s Windows 10: Some issues to consider before you upgrade

Microsoft Corp. is releasing Windows 10 in 190 countries Wednesday as a free update for most people currently running Windows 8.1 or 7 (Service Pack 1). (Robert Galbraith/Reuters)

A lot will be riding on the mass-market release next week of Microsoft’s latest operating system, Windows 10.

As a result, most users never upgraded, requiring Microsoft to support and provide security patches for a bigger mishmash of platforms.

To entice customers to take the leap this time, the company made the unprecedented announcement in January that Windows 10 will be free for most owners of Windows 7 and 8, as long as they upgrade within the first year.

“It’s in Microsoft’s interests — from an update, security and customer satisfaction standpoint — to get more of its users on the same OS which it will be updating on a constant basis,” said Mary Jo Foley, editor of theAll About Microsoft blog at ZDNet.com.

Just because the new system software is free, however, doesn’t mean everyone should jump on it right away, or even at all, experts say. Here are some points to consider:

Most major new software versions come with a bevy of added features, but that means they also often have a lot kinks to iron out.

“Especially with Microsoft products, there’s often lots of problems when they first come out,” said Heinz Deubler, a certified Microsoft systems expert who runs an IT firm in Vancouver.

He said he hasn’t tested out a pre-release version of Windows 10 yet, but will approach it with his usual caution around Windows upgrades.

“I’m telling my clients, don’t touch it until it’s been out for about six months. The rule of thumb is to wait for the first service pack.”

The thinking goes like this: Once Windows 10 has had a chance to be installed on the many brands and configurations of computers that can run it, IT experts will have a better sense of how it performs in different conditions, and users can then decide whether they want it for their own devices.

One of the Windows 10 features that has some industry experts wary is that, for home users, it forces you to accept system updates from Microsoft. In other words, Windows will automatically download and install, in the background, whatever amendments Microsoft comes out with.

For security patches — fixes to the system software that plug security gaps and prevent malicious software installation — that’s generally a good thing. But for other features, not all users are content to give Microsoft control over what’s installed on their machine — especially until the new features have been widely tested and deemed glitch-free.

“Another problem I have with automatic updating is that it could become a conduit for offloading junkware onto users,” writes computer books author Adrian Kingsley-Hughes.

He points out that Microsoft has used updates — albeit optional ones — to push the Bing toolbar and Skype (which Microsoft owns) on users in the past.

Windows 10 Pro users will have a bit more leeway to delay the installation of new features, but eventually they’ll have to accept them. Only the highest-end users, those running Windows 10 Enterprise, wil get complete control over what updates to accept. 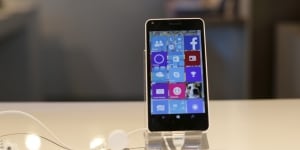 A mobile phone featuring Windows 10 is seen on display at Microsoft Build in April. Microsoft says Windows 10 is designed with mobile computing in mind, allowing users to switch seamlessly between personal computers, tablets, smartphones and other gadgets. (Robert Galbraith/Reuters)

Microsoft says it will continue to provide feature updates to Windows 10, as well as fixes for particular problems that creep up for smaller numbers of users, through 2020. There will then be five more years after that of “extended support,” which means security and reliability updates.

Contrast that to Windows 7 — the operating system on between 50 and 60 per cent of the world’s personal computers — for which no new features have been forthcoming since January, while extended support ends in 2020.

So if you’ve recently purchased a new computer that could last for years, you should consider upgrading to Windows 10 to lock in what will likely be a lifetime (for the computer) of new features and support. Stick with Windows 7 and you won’t get any new features. Furthermore, Windows 7 updates to guard against viruses and malware will end in five years, potentially before you’re ready to get rid of the machine. (For Windows 8, support for new features ends in 2018 and extended support runs to 2023.)

For most average home and small business users, upgrading to Windows 10 will be free. But that, er, window of opportunity doesn’t last forever.

“It will be a free download for exactly one year starting July 29. So if a user wants this for free (instead of for some as-yet unknown upgrade cost), s/he should think about moving some time within that year-long period,” Foley said in an email interview.

Once upgraded to Windows 10, Microsoft promises there will never be any fees or costs to update with the latest fixes for the life of the device.

And who exactly can get Windows 10 free? Anyone who has the home or professional versions of Windows 7 Service Pack 1 or Windows 8.1. If you have plain Windows 7 or 8, you’ll have to upgrade them first — for free.

Even people running non-genuine copies of Windows 7 or 8.1 can upgrade for free to Windows 10 — but their copy of Windows 10 will be non-genuine too, which in the past has made them ineligible for all updates except for security patches.

The biggest group of users who can’t get a free upgrade to Windows 10 are people running the enterprise editions of Windows 7 or 8, which means employees at corporations that have purchased volume licenses for the operating system.