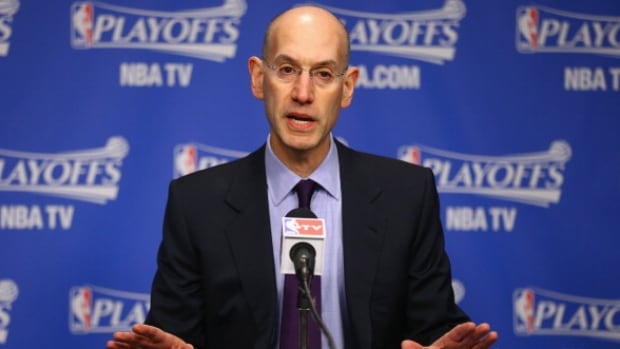 NBA commissioner Adam Silver has reportedly opted to move the 2017 All-Star Game out of Charlotte due to anti-LGBT laws. (Andy Lyons/Getty Images)

The NBA is moving the 2017 all-star game out of Charlotte because of its objections to a North Carolina law that limits anti-discrimination protections for lesbian, gay and transgender people.

The league had expressed its opposition to the law known as HB2 since it was enacted in March, and its decision Thursday came shortly after stage legislators revisited the law and chose to leave it largely unchanged.

“While we recognize that the NBA cannot choose the law in every city, state, and country in which we do business, we do not believe we can successfully host our all-star festivities in Charlotte in the climate created by HB2,” the league said in a statement.

The league added that it hoped to announce a new location for next February’s events shortly. It hopes to reschedule the 2019 game for Charlotte if there is a resolution to the matter.

“We understand the NBA’s decision and the challenges around holding the NBA all-star Game in Charlotte this season. There was an exhaustive effort from all parties to keep the event in Charlotte, and we are disappointed we were unable to do so,” Hornets chairman and Hall of Famer Michael Jordan said. “With that said, we are pleased that the NBA opened the door for Charlotte to host all-star weekend again as soon as an opportunity was available in 2019.”

The news was first reported by Adrian Wojnarowski of The Vertical, who suggested New Orleans is the leading contender as a replacement for the 2017 game.

Commissioner Adam Silver wanted to wait as long as possible to make one, believing positive dialogue could lead to changes it felt the law needed. But he also said a decision would need to be made this summer, and the league was disappointed when the General Assembly restored the ability of workers to use state law to sue over employment discrimination on the basis of race, religion and other factors — but left gender identity and sexual orientation unprotected.

There was no appetite among Republican lawmakers to change the provision requiring transgender people to use restrooms corresponding to the sex on their birth certificates in many public buildings — a measure at the heart of two legal challenges in federal court.

The law passed in a March special session also excludes sexual orientation and gender identity from antidiscrimination protections related to the workplace, hotels and restaurants; and overrules local antidiscrimination ordinances. Republican leaders have said the law was passed in response to a Charlotte ordinance that would have allowed transgender people to use restrooms consistent with their gender identity.

Governor Pat McCrory lashed out at the sports and entertainment industry and the media in response to the NBA’s announcement.

“The sports and entertainment elite, Attorney General Roy Cooper and the liberal media have for months misrepresented our laws and maligned the people of North Carolina simply because most people believe boys and girls should be able to use school bathrooms, locker rooms and showers without the opposite sex present,” McCrory said in a statement issued by his office.

The law has drawn opposition from a number of entertainers who have canceled performances in North Carolina. Duke recently had to replace one of its games scheduled for next season when Albany was prevented from traveling to Raleigh by New York Governor Andrew Cuomo’s travel ban.

A top Massachusetts lawmaker is making a play for the NBA’s 2017 All-Star Game.

The league announced Thursday that it’s moving the game out of Charlotte because of its objections to a North Carolina law that limits anti-discrimination protections for gay, lesbian and transgender people.

Among other things, the law allows transgender people to use restrooms and locker rooms that correspond with their gender identity.

The league’s decision comes less than a month after North Carolina legislators revisited the law and chose to leave it largely unchanged. The league hopes to announce a new location soon.