Four Cuban rowers have defected to the U.S. during the Pan Am Games, according to the team’s coach, a move one agent says is likely due to economic conditions inside Cuba.

Coach Juan Carlos Reyes says Leosmel Ramos, Wilber Turro, Manuel Suarez and Orlando Sotolongo have left the team and travelled to the United States. There are more than 150 Cuban athletes at the Pan Am Games, competing in a range of sports.

The Games rowing venue in St. Catharines, Ont., is only a few kilometres from the U.S. border.

Reyes says Ramos and Turro dropped out before the regatta began on Saturday while Suarez and Sotolongo were in earlier races and then withdrew. Sotolongo won a silver medal at the Games and made a Facebook post about his love for Cuba shortly before leaving the team. 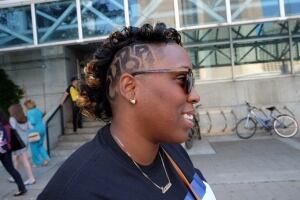 A proud Cuban fan poses for a photo ahead of the Pan Am Games opening ceremony. Cuba sent a large contingent of over 150 athletes to compete at TO2015. (John Rieti/CBC)

He said they have been in touch with teammates through Facebook.

Joe Kehoskie, a U.S.-based agent who has represented several Cuban baseball players, said the defections are likely driven by the economic conditions inside Cuba rather than the chance to pursue a sports career in the U.S.

Kehoskie said Cuban baseball players and boxers have starred in the U.S., but he doesn’t know of any other amateur athletes who have achieved high-level success.

“Unlike baseball players … nobody is going and offering a rower or a hurdler or a gymnast a speedboat trip off the island.”

While the U.S. is in the process of normalizing relations with Cuba, including a recent agreement to reopen embassies, Kehoskie said many Cubans are more concerned with leaving the island now than ever. That’s because, he said, the U.S. may end its “wet foot/dry foot” policy, which allows any Cuban who steps foot on U.S. soil to remain in the country.

Argentine rower Milka Kraljev said she knew some of the defectors personally.

“They have a really hard time in their country and a few of them took a chance and they leave.”

Pan Am Games officials say their protocol for dealing with defections includes working with the Games’ integrated security unit and, if necessary, the affected country’s national Olympic committee.

Defections have happened at past Canadian competitions

“Generally, if a Cuban national arriving at a CBP port of entry or between ports expresses fear of return to Cuba and/or their country of last residence, he or she is inspected and paroled. CBP officers and agents will verify whether the individual has any criminal or existing U.S. immigration history,” it said.

Cuban refugees can apply for permanent residence a year after being inspected and paroled, the department said.

Eight members of the Cuban delegation defected when Canada last hosted the Pan Am Games in 1999. Cuban officials at the time alleged that Canadian media were encouraging athletes to jump ship.