‘The numbers speak for themselves,’ top organizer says 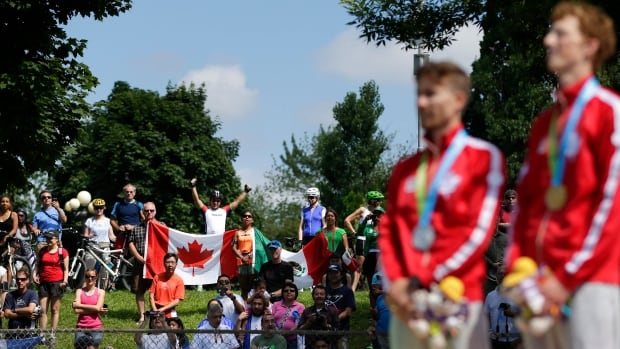 Organizers say the Pan Am Games, which honoured Canada’s Evan Dunfee and Inaki Gomez Sunday, have sold more than 300,000 tickets since the opening ceremonies on July 10. (Felipe Dana/Associated Press)

“The numbers speak for themselves,” said Toronto 2015 CEO Saad Rafi. “With one million tickets sold and millions of Canadians tuning into the Games, there’s no doubt that Toronto and the region have embraced these once-in-a-lifetime Games.”

Ticket sales have jumped by more than 300,000 since the opening ceremonies on July 10, organizers said in a news release. Roughly 16 million Canadians, or 46 per cent of the population, have tuned in to watch the multi-sport event on CBC or its partners as of July 16, according to the release.

Ticket sales sat around 750,000 before the Games kicked off, which was a low figure compared to the roughly 1.2 million that were available. This prompted some critics to express concerns about public apathy to the Games, paving the way for Toronto Mayor John Tory to urge the city to be more enthusiastic about the event.

“This is going to be a great event. The tickets are going to be sold,” Tory said in June. A couple of weeks later, the mayor said he was sensing a “real change” in the city’s attitude toward the Games.

Organizers predicted last December that 250,000 people would visit the province to attend the Games.

Although many events are sold out, Rafi said some last-minute tickets may become available closer to the event dates. On July 6 organizers released more tickets for previously sold out “high demand” events including the opening ceremony.

Pan Am ticket sales are expected to garner $40 million for the Games, with sponsorships and government subsidies expected to help cover the remaining $2.5-billion price tag of the event.

According to organizers, TO2015 has garnered 534,000 social media mentions with 1.82 billion impressions internationally. The Games have also been a trending topic worldwide at times. The official app has been downloaded more than 135,000 times and the Games’ website has received 7.2 million hits.

The Pan Am Games conclude next Sunday and will be followed by the Parapan Am Games, which begin Aug. 7. For full coverage, visit cbc.ca/panam.