A turnaround season for the Pittsburgh Penguins ended with Sidney Crosby once again holding the Stanley Cup.

Brian Dumoulin opened the scoring with a power-play goal and Patric Hornqvist added a late empty-netter for the Penguins. Matt Murray made 18 saves to give Pittsburgh a championship exactly seven years after beating the Detroit Red Wings to win the Cup. 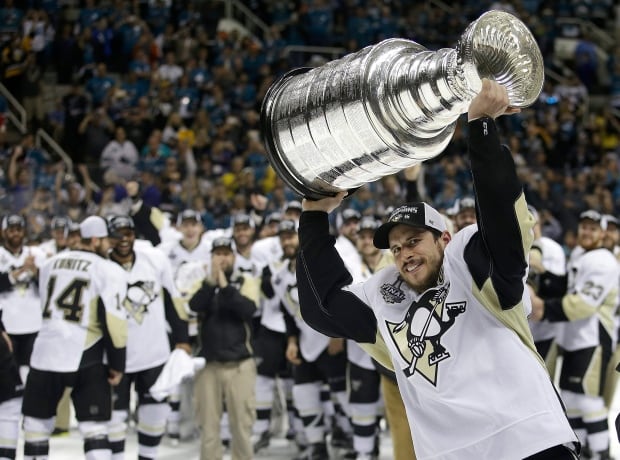 Penguins captain Sidney Crosby raises the Stanley Cup after the Penguins took down the Sharks in Game 6 by a score of 3-1 Sunday. (Marcio Jose Sanchez/The Associated Press)

“It wasn’t easy getting here, especially the way things started out,” said Crosby, who was awarded the Conn Smythe Trophy for playoff MVP. “We tried to keep fighting and slowly started to turn things around.”

The game ended when Crosby cleared the puck the length of the ice with San Jose on the power play, setting off a wild celebration.

Crosby did not score in the best-of-seven series but he did tally two assists in Game 6 and was a key factor on the ice for his play at both ends of the rink.

“Everyone has a part in this,” he said. “It feels really good to win your last game of the season.”

Crosby’s teammate, Chris Kunitz, said No. 87 is a special player for a reason.

“He can adapt and change his game to different things. Early in his career he went out and got points and did everything but that didn’t make him satisfied. He had to go out and lead through example and became a better player.”

Penguins owner Mario Lemieux pointed to general manager Jim Rutherford and a series of transactions — including the acquisition of Phil Kessel from the Toronto Maple Leafs — as the reason the Penguins won it all.

“It’s been an incredible year,” Lemieux said. “We had a rough start the first couple months of the season, then we made some changes … It’s hard to win this Cup. We’re going to enjoy it for a while.” 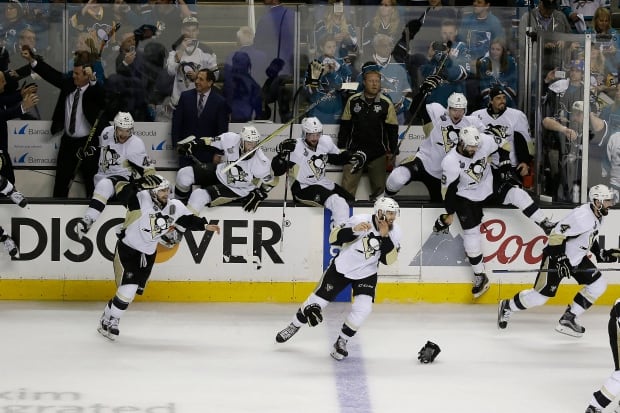 Last December, the Penguins were near the bottom of the Eastern Conference standings. Six months and a new coach later, they are Cup champions.

This didn’t seem like it would be a season to remember last December when the Penguins were the near the bottom of the standings in the Eastern Conference and then-coach Mike Johnston was fired.

But led by coach Mike Sullivan, the Penguins recovered to make the playoffs as the second-place team in the Metropolitan Division.

Pittsburgh knocked off the New York Rangers in the first round, they defeated the Presidents’ Trophy-winning Washington Capitals in round two and then rallied from a 3-2 series deficit to beat the Tampa Bay Lightning in the Eastern Conference final.

The Penguins did not trail the Stanley Cup Final until Game 5 at home and responded to a strong push from San Jose in the clincher to avoid a decisive seventh game. Pittsburgh held San Jose to just one shot on goal in the first 19 minutes of the third period of Game 6 to preserve the one-goal lead and sealed the win with Hornqvist’s empty-netter.

Logan Couture scored the lone goal for the Sharks, whose first trip to the Stanley Cup Final in their 25-year history ended two wins short of a title. Martin Jones made 24 saves and was San Jose’s best player for the final series.

The Sharks could only praise the Penguins after seeing them lift the Cup.

“It’s not just their speed, they have good sticks, too. They force you into quicker decisions,” coach Pete DeBoer said of Pittsburgh. “They really challenge your execution. We hadn’t seen pressure and sticks like that through the first three rounds. I think our execution was an issue because of that.”

Patrick Marleau, who was drafted by San Jose in 1997, said Pittsburgh played hard and created their own luck.

“They had the ability to move the puck up the ice pretty quick. We scored and they had an answer. They came right back.”

The Penguins jumped ahead in the first period for the fifth time in six games this series after Dainius Zubrus was sent off for tripping when Crosby’s line didn’t allow San Jose to leave its own zone.

Dumoulin took advantage of the power play when his weak shot beat Jones from the point.

The Sharks tied it early in the period when Couture beat Murray with a wrist shot that squeaked by the Pittsburgh goaltender.

Pittsburgh answered 1:19 later when Crosby sent a pass from behind the net to Letang, who beat Jones with a one-timer from a sharp angle to make it 2-1.

Article Written By: The Associated Press with CBC Sports