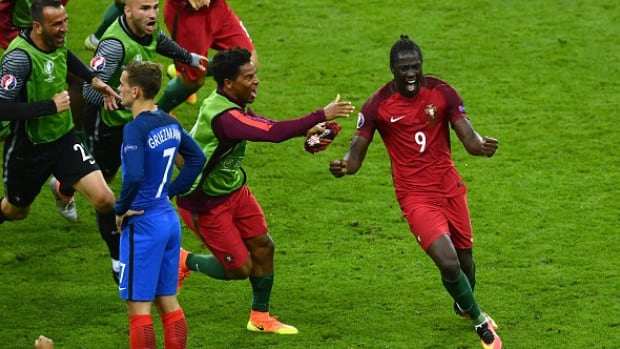 Portugal’s players crowded around Cristiano Ronaldo as he sat on the turf, but their tearful captain couldn’t withstand the pain of his injury any longer.

The Portuguese had to win their first major trophy the hard way on Sunday, stunning France 1-0 after extra time in the European Championship final – having played without Ronaldo from the 25th minute.

Two hours after being carried off on a stretcher, the three-time world player of the year returned a champion for the first time with his country.

“I had bad luck because I had a small injury in the beginning of the game, but my colleagues did their part — they run, they fight,” said Ronaldo, who has already won every major club honour. “Nobody believed in Portugal but we won”.

An unlikely scorer secured the pre-tournament outsiders a title at last.

It could be an uncomfortable few months ahead for Eder, the unheralded striker who will return shortly to French club Lille after breaking French hearts with his 109th-minute goal.

A second-half substitute, Eder scored only his fourth goal in 29 appearances for Portugal with a low shot from 25 metres (yards) past goalkeeper Hugo Lloris.

“Cristiano told me I would be scoring the winning goal,” Eder said. “He gave me strength and positive energy.”

‘Football can be very cruel’

In doing so, Portugal denied the French a third final victory on home soil to add to Euro ’84 and the 1998 World Cup.

“Football can be very cruel,” said Lloris, France’s captain. “The overriding emotion is a lot of sadness.”

Twelve years after losing to Greece on home soil in their last appearance in the final, it was Portugal’s turn to spoil the host nation’s party. And they achieved it after winning only one of their seven games at Euro 2016 inside 90 minutes, and after losing the inspirational Ronaldo midway through the first half.

“It was tough because we lost our main man and we had all our hopes pinned on him because he’s a player who can score a goal at any minute,” Portugal defender Pepe said. “When he said he couldn’t go on, I tried to tell my teammates that we have to win it for him. That we were going to fight for him.”

It was a mostly dull and stodgy final but the record books will only show that Portugal went from third-place in its group to champion, and with little help from Ronaldo in its last match.

The championship’s first 24-team tournament became a reality over the last month, but the quality of football deteriorated. Such a sterile showpiece — the first European Championship final to be scoreless after 90 minutes — seemed a fitting climax.

“We weren’t clinical enough,” said France coach Didier Deschamps, who lifted the World Cup in the stadium as a player in 1998. “We weren’t cool-headed enough.”

Even France forward Antoine Griezmann, the tournament’s leading scorer, couldn’t rise to the big occasion. There was no seventh goal of Euro 2016 from the Atletico Madrid forward, who also lost out in the Champions League final six weeks ago to Ronaldo’s Real Madrid.

Griezmann was the first player to find the target, but his header was tipped over by Rui Patricio, who was formidable in the Portugal goal. When an inviting cross from Kingsley Coman was delivered in the 66th, Griezmann missed with a free header.

Only once was Patricio beaten, when Andre-Pierre Gignac’s shot hit the inside of the post but it came back out.

Luck was on Portugal’s side, and Eder was able to strike the decisive blow.

It didn’t seem to be going Portugal’s way in the ninth minute when Dimitri Payet’s right knee clattered into Ronaldo’s standing left leg.

Ronaldo went down in agony — writhing, grimacing and screaming. He was able to return, but this was one injury he could not run off.

Ronaldo fell to the turf again in the 17th. One of the moths infesting the national stadium fluttered over Ronaldo’s tearful right eye. Teammates tried to help in vain to help, with Nani tending to the knee.

Ronaldo watched the game forlornly on the touchline as strapping was attached before dragging himself back onto the field.

But Ronaldo’s mobility was restricted. Battling through the pain, regularly reaching down to check on the injury, Ronaldo realized there would be no miracle recovery.

The clock hit 23 minutes and Ronaldo ripped off his captain’s armband and tossed it on the turf. Slumping to the ground again, Ronaldo was consoled by Nani, who embraced his former Manchester United teammate as the armband was transferred.

The stretcher came on and in the 25th minute Ronaldo became a spectator. But thanks to Patricio’s array of saves and dogged defending, Ronaldo left a champion.

Unlike his great rival Lionel Messi, the Argentina and Barcelona forward, the 31-year-old Ronaldo has now filled the medal void on the major international stage. It’s a rapid turnaround for a national team that exited the 2014 World Cup in the group stage.

“It’s something unbelievable in my career,” Ronaldo said. “Something I deserve.” 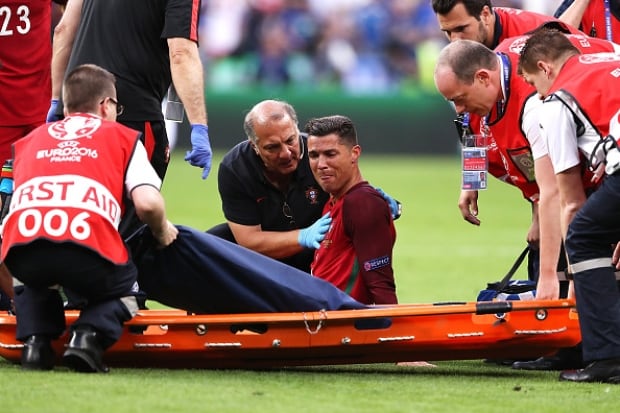 Portugal’s Cristiano Ronaldo left the final in the first half after being injured in a collision with Dimitri Payet earlier in the match. (Matthew Ashton/Getty Images)

Article written by The Associated Press