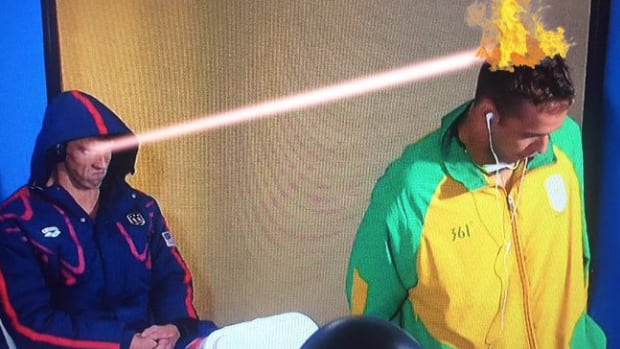 Michael Phelps’ game face was one of the popular memes trending on Tuesday at #Rio2016. © @nascarcasm/Twitter

Aside from the greatness that was #PhelpsFace and the weirdness of the green pool, what else were people sharing and snapping about on Tuesday?

First, some good news. Dutch cyclist Annemiek van Vleuten’s nasty crash early in the Games had fans concerned for her health. But according to her tweet, she’s already on the road to recovery… and on the road again. Get well soon, Annemiek!

Thanks for all the messages. Hard to deal with my disappointment but also proud about our performance #teamNL pic.twitter.com/9uRaRniFV6

In the U.K., the press is used to hearing harsh words from the public, but it’s a bit of awkward when it comes from an Olympian’s mum. Thomas Daley and Daniel Goodfellow won bronze in the men’s 10-metre platform event, but most major British papers led with an image of Daley alone — Goodfellow was cropped out. Ouch! Daniel’s mum Sharon was on the case.

@suttonnick I am very surprised by this photo. Is it for real? I am Dan’s mum

I have contacted the journalist but don’t seem to have a reply yet! https://t.co/XxmGGI5mr5

And she may have gotten some action.

Thank you for all the messages. I have still hundreds to go through. Looks like there will be lots in papers today!

Over in China, swimmer Fu Yuanhui is a social media sensation. It’s not because of how well she did in the 100-metre backstroke semifinals, but because of her interview afterward. She won the hearts of Chinese netizens with her sincere surprise and delight at her time.

In the video above, Fu exclaims, “58.95! I thought I did 59 seconds! Wow! Am I so fast? I am very pleased!” Fu’s fans now call her “the comedian in the swimming profession,” and have shared her video thousands of times, drawn her in adorable cartoons, and imitated her expressions in selfies.

The United States won gold in gymnastics, but there was some criticism for Gabby Douglas. Team USA took the women’s gymnastic team final, and during the playing of the national anthem, Douglas stood at attention but did not put her hand over her heart. This sparked criticism on social media.

Would love to know why Gabby Douglas didn’t have her hand over her heart during the national anthem, she got to compete for her country #USA

But Douglas also had her defenders.

Gabby Douglas didn’t put her hand on her heart during National Anthem.
So what?
She just won🇺🇸🏅 for 🇺🇸🏅
Let her be! pic.twitter.com/zZXJRnDlAW

He claims his @Lubrio account was shut down this week without any prior warning from Twitter after the International Olympic Committee (IOC) complained about videos he had posted. All videos were under 90 seconds, and did not sound particularly interesting, but it seems the IOC is not to be trifled with when it comes to illegal video.

Imagine if it had been a gif!