That was the question posed by Tim Leiweke, former CEO of Maple Leaf Sports & Entertainment, when Toronto FC officially unveiled Jermain Defoe and Michael Bradley as its newest high-profile signings on Jan. 13, 2014. Years of losing and comical mismanagement by MLSE reduced the Reds to the point of irrelevancy in the Toronto sports markets, and made the franchise the laughing stock of Major League Soccer. But Leiweke’s rhetorical question promised better days, it promised hope.

As it turned out, that one phrase became a noose tightened around the club’s neck after it failed to make the playoffs that season. Like another infamous phrase in the TFC lexicon, “A Bloody Big Deal,” Leiweke’s “Why can’t we be great?” became embedded in this city’s sporting conscience as a sour reminder of yet another failure.

True greatness still eludes Toronto FC after a heartbreaking 5-4 penalty shootout loss to Seattle Sounders FC in Saturday’s MLS Cup final before a record, sellout crowd of 36,045 spectators at BMO Field. But even though it fell achingly short of becoming the first Canadian team in league history to win the MLS championship, TFC can take great pride in a magical campaign that forever changed the way Toronto sports fans think about and view this franchise.

“I’m just so proud of the team. Proud of the coaching staff, and proud of the players, and where they’ve taken the club this year. People in the city believe in us now. We want to keep this feeling and keep it going for next year,” general manager Tim Bezbatchenko told Sportsnet after the game.

This was a bitter loss for TFC, not just because it enjoyed home-field advantage. The Reds carried most of the play and looked far more dangerous in attack, while the Sounders became the first team in MLS Cup history not to register a single shot on goal through 120 minutes of regulation and extra time.

“There’ll be a tomorrow for us. To have captured the hearts of the entire city—these players have nothing to be ashamed about. It’s not even bitter sweet. It’s disappointing because we wanted the Cup and we didn’t get it. But we’ll be back.”

Toronto coach Greg Vanney was stoic as he fought back his emotions in talking to reporters in the post-match press conference.

“I’m disappointed, and I’m sure it’ll hit me and I will break down at some point, but right now I’m just a little bit numb,” Vanney admitted.

“We were the better team tonight. Maybe a little bit more quality in the final third and we win this game,” Moor offered. “It’s a cruel game. It’s a very cruel game. But we had our chances to put them away and they hung around, so you have to give them credit.”

After the national anthems, supporters in the south end of the stadium unfurled a massive tifo that read “Nothing is more powerful than a club whose time has come,” a nod to the team’s incredible journey in reaching its first MLS Cup after so many years of futility. The fans’ display provided the most genuine moment of artistry in a game that, for all its tactical nuance and intrigue, was lacking in beauty and grace. This was a not a classic, and it paled in comparison to the seven-goal thriller played at BMO Field last week between Toronto and Montreal in the semifinals. 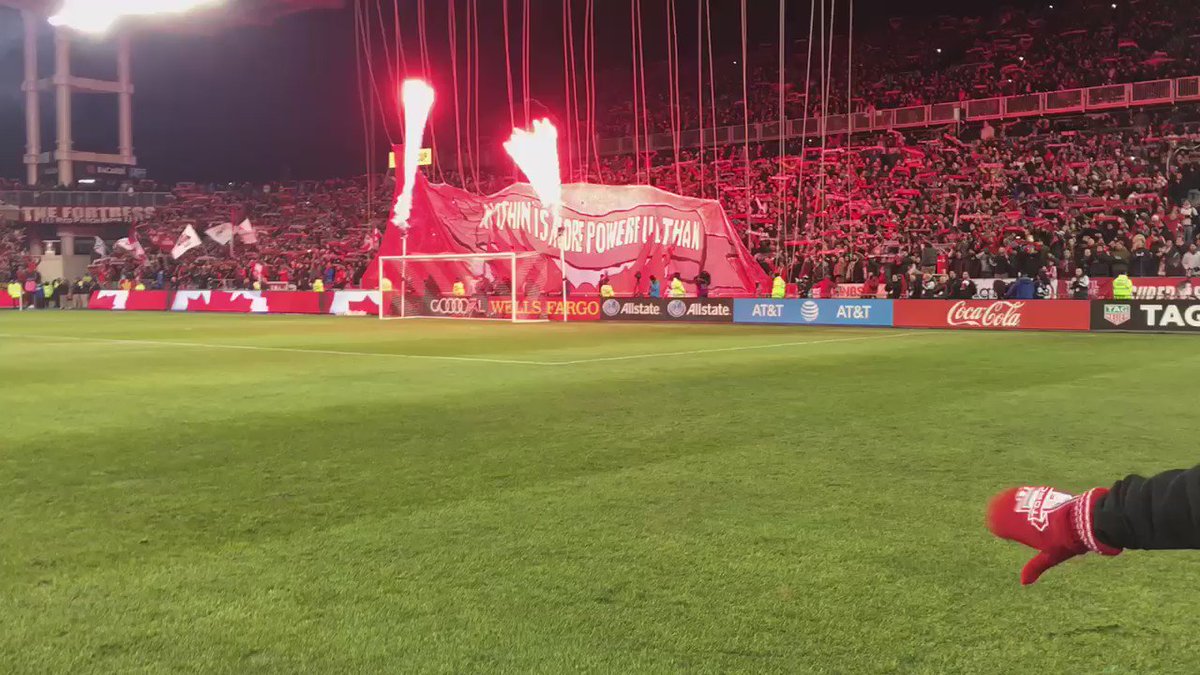 Vanney went with his favoured 3-5-2 formation and the same 11 players that he’s used for most of this playoff campaign. Jonathan Osorio came in for fellow Canadian midfielder Will Johnson, who started the second leg of the Eastern Conference semifinals.

It was a cool but dry minus-3 Celsius at kickoff, the frigid temperatures doing little to dampen TFC’s attacking spirit early on. It was the Reds who carved out a dangerous scoring opportunity in the second minute when Sebastian Giovinco chested the ball into the path of Jozy Altidore inside the box. The American had a clear sight on goal, but his shot took a deflection and whispered just past the far post.

Tensions nearly boiled over moments later when Nelson Valdez kicked Moor in the groin while challenging for a ball. Moor crumbled to the ground, while Valdez somehow avoided a caution. That was par for the course from referee Alan Kelly, who barely blew his whistle, instead allowing the players to play as the game developed into a cagey and physical affair. When Seattle did break forward, Bradley was there to chase and harry them off the ball, and then quickly lead his team into a transitional attack with his pinpoint passing.

Bradley sick to his stomach about MLS Cup loss

The Reds comfortably controlled the tempo of the first half, but they lacked ideas in the final third and thus struggled to unlock Seattle’s well-organized defence. It was also far too narrow from Toronto, which allowed the Sounders, quarterbacked by midfield general Osvaldo Alonso, to neutralize Giovinco for the opening half, with the Italian showing visible signs of frustration as the game wore on. Giovinco had a rare scoring chance early in the second half when he was played in on goal, but the angle was too tight and he thrashed his shot into the side of the net.

The rest of the half followed the same pattern of Toronto venturing forward, only to be repelled by Seattle. Altidore had a chance to score the winner in injury time off a header played to the back post by teammate Nick Hagglund. Sounders goalkeeper Stefan Frei beautifully read the play, though, and heroically punched the ball out of danger before Altidore could get to it.

Toronto’s last roll of the dice came in the first half of extra time, as a spent Giovinco was replaced by Tosaint Ricketts. Vanney told reporters after the game that Giovinco asked him to be subbed out due to fatigue. It was Vanney’s last substitution and the hope was Ricketts could invigorate what was a limp TFC attack.

Within minutes, the Canadian made his mark, unleashing a volley from inside the penalty area that flashed by the post. Ricketts then broke down the right and delivered a dangerous cross into the box for Altidore, who connected on a header that was destined for the back of the net. Frei scrambled and somehow reached back behind him to clear the ball away with a highlight-reel save. Ricketts carved out another scoring chance late in extra time, slipping between two Seattle defenders and firing an angled shot that forced Frei to get down to make another crucial stop.

Is this real life? #MLSCup

So, off to penalties where Frei, a former TFC goalkeeper, and Clint Irwin took centre stage in front of the boisterous and heaving south stand. Altidore and Seattle’s Brad Evans converted before Bradley’s tame shot was stopped by Frei. Andreas Ivanschitz and Toronto’s Benoit Cheyrou scored, and then Irwin came up big to deny Alvaro Fernandez.

Tied 2-2 after three penalty takers, Johnson stepped up and blasted his shot in, and Joevin Jones did the same for the Sounders. Moor gave Toronto a 4-3 lead, only for Nicolas Lodeiro to tie things up. At this point it was sudden death, and TFC’s Justin Morrow opened the door for Seattle after hitting the crossbar. Roman Torres duly dispatched his penalty past a helpless Irwin, sealing an incredible win for the Sounders.

Moments after Torres’ shot flew past Irwin, BMO Field quickly cleared out as the Sounders celebrated before the 1,500 travelling Seattle fans that were tucked into the upper northeast corner of the stadium. After Frei was given the MLS Cup MVP award, league commissioner Don Garber presented the Philip F. Anschutz Trophy to the team on a stage set up at midfield as fireworks went off and confetti rained down.

“It can be a cruel game sometimes. The margins are so small, and on nights like this you have no choice but to go for it. … We were strong, and brave and went after the game in a hard way from the first minute [up until] the 120th minute,” Bradley said.