The Evolution Of UFC Event Marketing: From The Beginning To UFC 200

When Alan Hunter first met Lorenzo Fertitta in 2001, Fertitta shared with him a vision for UFC that would take it to a mass audience. The focus would be on martial arts, not street fighting. Fertitta wanted to position UFC so it would appeal to a network – showing the extreme natural of the sport but emphasizing the traditional forms of martial arts at its core like jiu-jitsu. 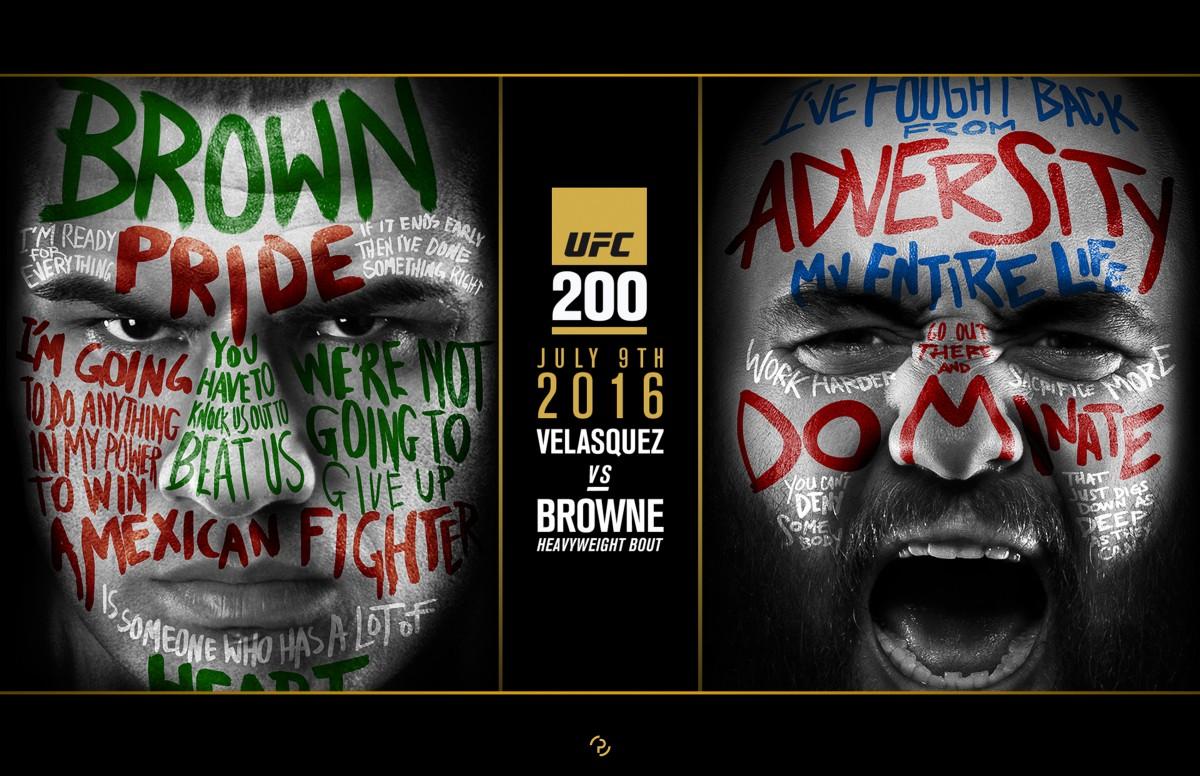 Hunter, President and CCO of advertising agency PETROL, was charged with creating a visual identity for UFC’s events that went beyond a single fight and reinvented the pay-per-view model of advertising in order to grow the brand year-round, not simply around one fight.

For 13 years now, PETROL has worked hand-in-hand with UFC’s internal marketing team to create everything from event posters to video game covers that go beyond the typical imagery for MMA.

“Most fight posters are just two half-naked men staring at you,” Hunter explained. ”We try to come up for a reason for them to be there.”

Hunter notes that boxing has incredible personalities and yet misses opportunities to tell their stories. That’s not a mistake UFC has made, in his opinion.

“What has been the guy’s journey? What makes this more than just a fight? The first thing we do is get into the backstory, what it means to them, what it means to fans, how fans will get invested – that all informs how we build the visual identity.”

“We went from traditional poster marketing to draping the guys in flags,” said Hunter. “Honestly, we didn’t know if Lorenzo would love it or hate it.” 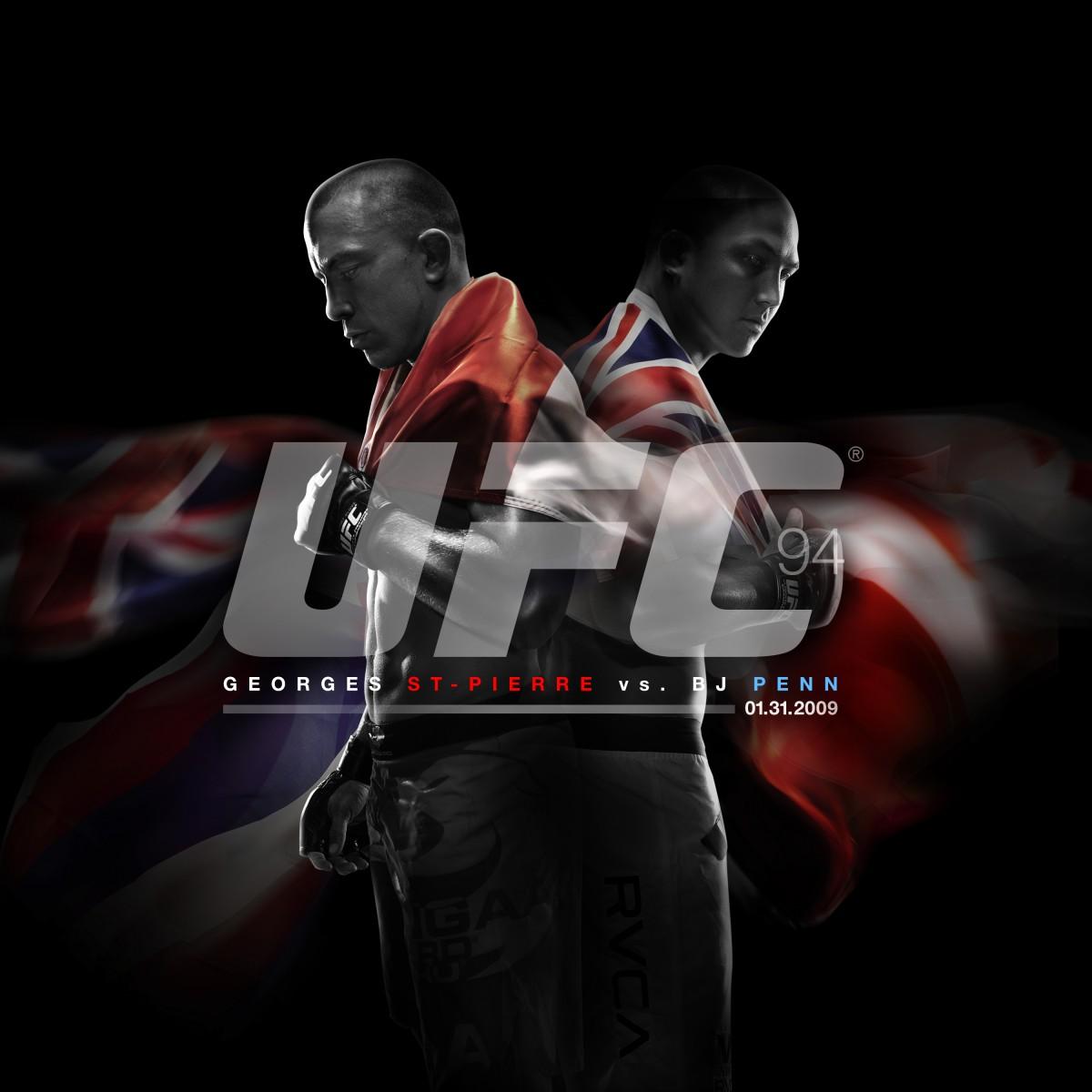 Fertitta and the rest of the UFC team loved the idea, and it became one of the catalysts for new apparel options to be launched at UFC 94.

“WWE does a great job of building up fictional characters,” said Hunter. “This was about building up emotion around real characters and stylizing apparel in a whole new way. It was a big departure for UFC.”

From there, UFC truly went global, hosting events in places like Japan and Brazil. Hunter and his team were right there, continuing to evolve the posters to reflect the increasingly global brand of the UFC. 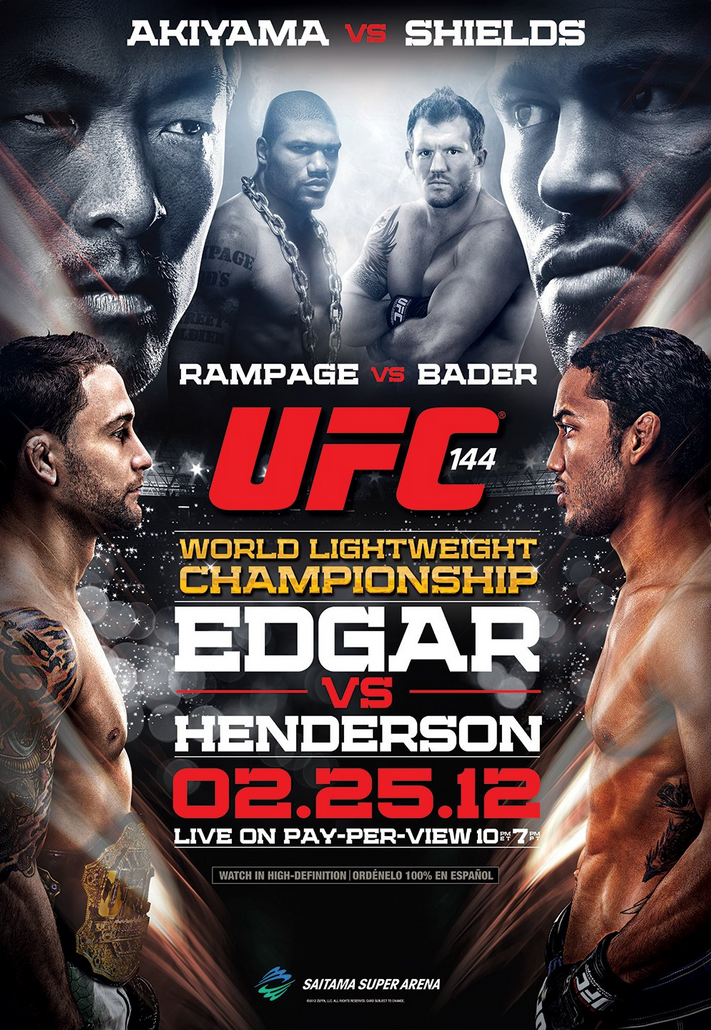 Then Fox came into the picture, and the branding needed to shift to account for that monumental shift in UFC’s business.

“The first Fox imagery was really about building awareness. Lorenzo and Dana [White] always had in their heads that they wanted to get to the level of the NFL in terms of awareness,” said Hunter.

“The NFL doesn’t always build around the players, it’s about the league.

“When UFC made the Fox deal, you could see a visual shift because those fights were promoted differently than the pay-per-views. For the first time, UFC was free. But, you didn’t want to step on the toes of the pay-per-view fights either.” 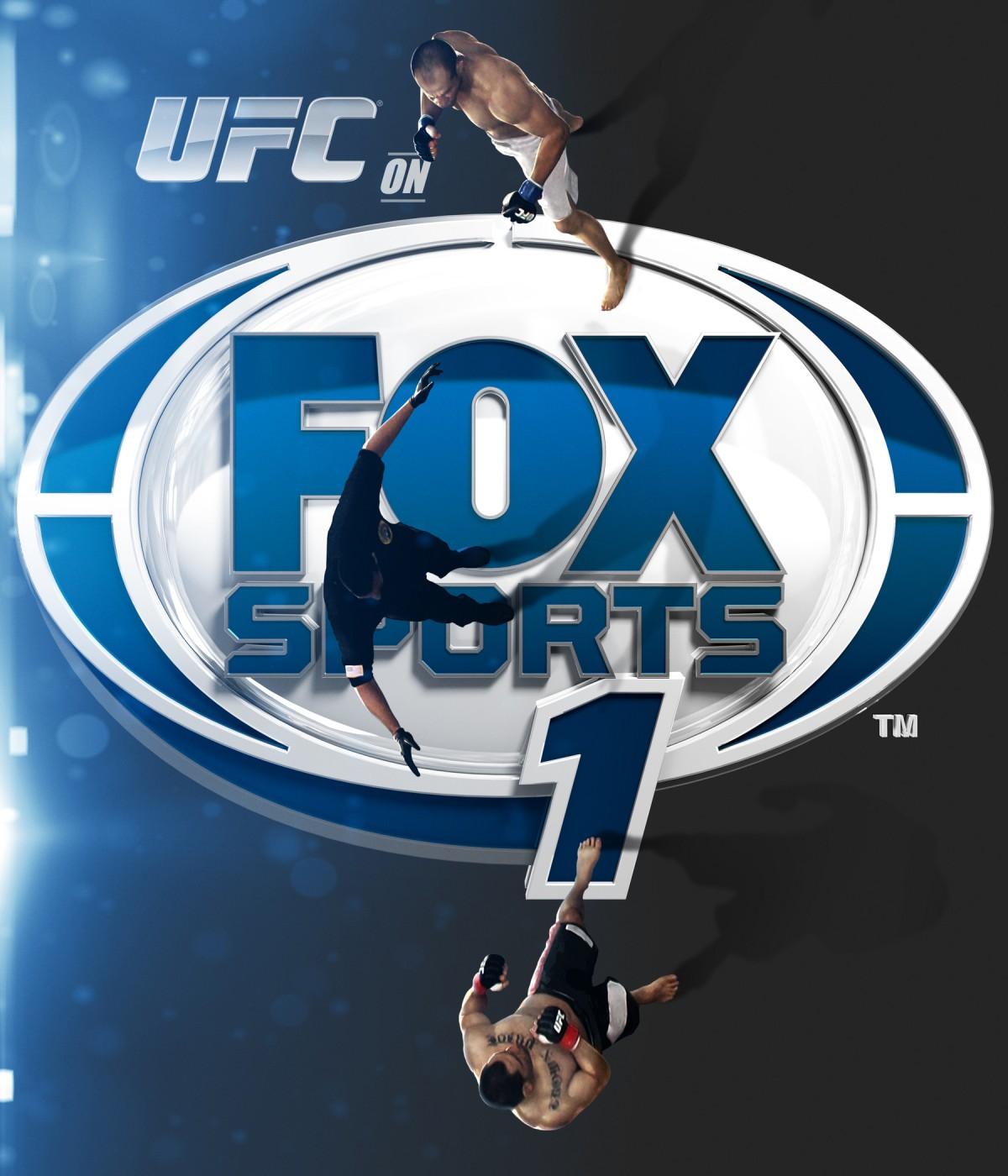 Hunter says there’s a huge difference between working on UFC materials and other properties they represent, such as popular video games like Call of Duty.

“When we’re working on a launch like Call of Duty, we’re building up for six months to get people to invest $60-100 for a product. We want to hit them on five or six different touchpoints.

“With UFC, we get right to the core of emotional marketing. It’s the emotion of picking a side. UFC has to get people excited 365 days a year. Beyond soccer, there’s no other property that has to do that.”

Hunter says the most brilliant thing UFC does is that they build the excitement around the personalities by not controlling them.

“Some leagues have a stringent set of rules and a way that people are allowed to speak and what they’re allowed to talk about. Not UFC, and you see that in the press conferences.”

And that was PETROL’s inspiration for the UFC 200 campaign.

Hunter says his team was working on a pitch for UFC 200 into the wee hours of the morning back in February when one his guys came into the conference room and asked if anyone had seen Conor McGregor’s blow up at a press conference over a press briefing poster for UFC 196 (which was not created by PETROL). The team turned on the television to check out McGregor’s now infamous tirade.

“Where is my damn belt? This is a super fight. I look up at that poster and I see myself tucked in the back there,” McGregor said at the pre-fight press conference. “I see a guy who has his last gate was $1.7 million and he fought on free TV. He’s never brought a dime to the company and he’s never made a dime, yet here he is sitting on the front of my poster. I think that’s a department that needs to be looked at. Somebody’s sleeping on the job.”

McGregor got a new poster, and PETROL had their idea for UFC 200′s marketing materials.

“My immediate inspiration was to make [McGregor’s tirade] into a campaign and send it to Dana to use as a Twitter campaign. We wanted to cover [McGregor’s] body and make up his entire being out of these quotes about how great he is.

“When Lorenzo and Dana saw the pitch and shared it with their internal team, they said they really loved it, but that it was bigger than Conor McGregor – they thought it would be great for UFC 200.”

Hunter says they immediately started gathering quotes from fighters to create the promotional materials for UFC 200.

“When they talk about their opponents or an upcoming fight, sometimes it’s just a mental dump – they just say what they’re thinking. Some of the statements are incredible,” said Hunter.

“We were very strategic about what we were putting on each fighter’s face. It’s an incredible tool to show that UFC 200 is about so much more than these matchups – it’s what’s behind the matchup, what brought the fighter there.”

Hunter says fans took to the campaign immediately, creating their own images.

Then in April, White announced McGregor was out of UFC 200.

“We were all set to go do a photo shoot with the UFC internal team, and that day McGregor drops out. But what’s so great is that a fighter dropping out is just a bump in the road for the UFC. We came up with the idea of paying off the faces campaign by staying very personal.”

PETROL built a stage with a mirrored floor and two camera rigs that would shoot down at the fighter so the viewer would feel like they were inside the ring – essentially on the floor of the octagon looking up at the fighters. 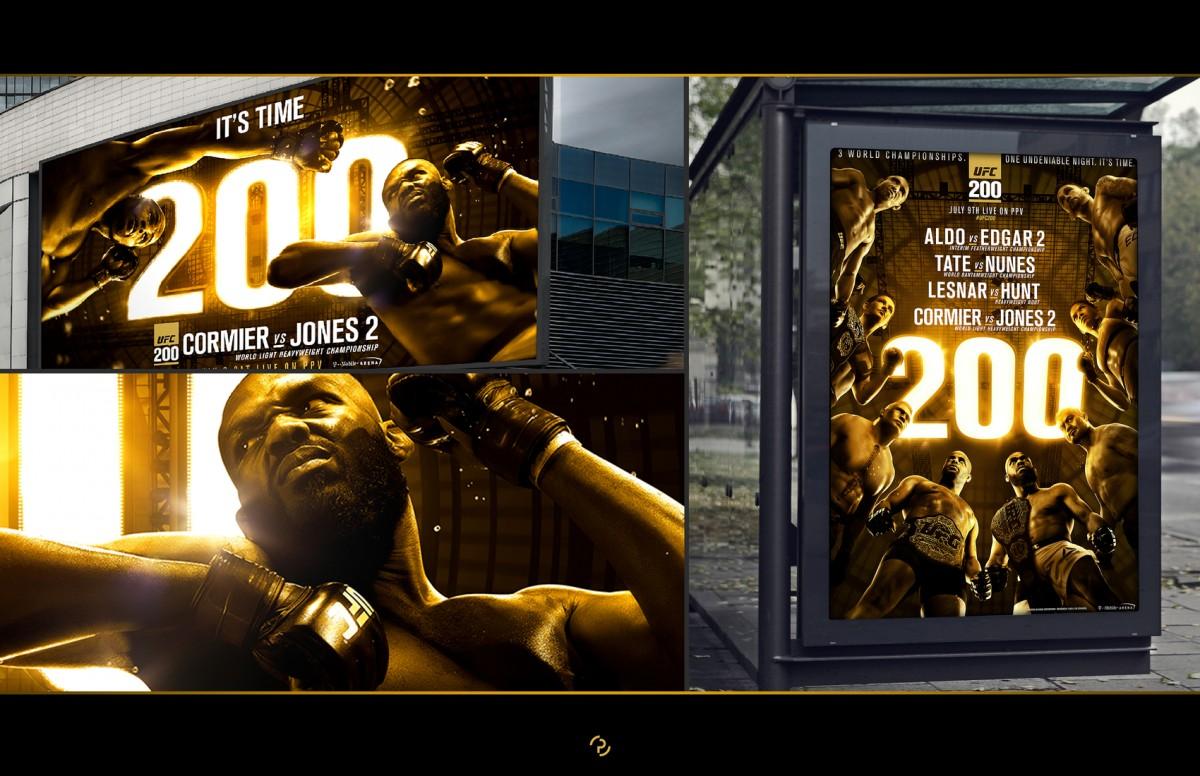 Hunter says the fighters came in for the photos and were immediately curious about the mirrors on the floor.

And now it’s time for the fighters to enter the real octagon and face their challengers for UFC 200. Hunter has no doubt about the payoff after all the months of marketing and hype.

“I’ve been to some of the biggest boxing matches in the world, NFL games, soccer in the UK, you name it. Nobody comes close to the show UFC puts on.”