From bench-clearing brawls to capacity crowds, this could be a series to remember

The Blue Jays are riding an emotional high after a dramatic first-round playoff win at home, but in Kansas City they’ll face an equally hot Royals team that’s out for revenge. Here are seven key storylines to watch for in the best-of-seven American League Championship Series, which begins tonight at 8 p.m. ET.

What, the Blue Jays-Rangers series wasn’t wild enough for you? The Jays-Royals could be even more heated.

The last time the two teams squared off, Royals starter Edinson Volquez beaned MVP-candidate Josh Donaldson early in the game, then unleashed another pitch near Donaldson’s face the next time the Jays third baseman came to the plate.

There was also the requisite trading of barbs in the media after the game, including Volquez saying of Donaldson: “Somebody hits you, you’ve got to take it — because you’re pimping everything you do.”

The Royals starter for Game 1: Volquez. 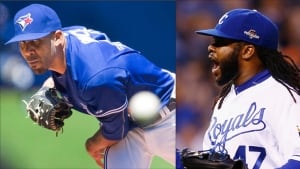 David Price and Johnny Cueto were both acquired at the trade deadline as the Royals and Blue Jays eyed a deep playoff run. (The Canadian Press/Getty)

This series could be a battle of ace pitchers acquired at the trade deadline: Johnny Cueto versus David Price.

Cueto, the dreadlocked starter acquired from Cincinnati, was brilliant in Game 5 for the Royals against Houston — retiring 19 batters in a row at one point. Still, Cueto struggled down the stretch and will need his best stuff against the Blue Jays’ powerful lineup.

Price, the best pitcher in the American League this season by most measures, finally recorded a postseason win during his relief appearance in Game 4 of the Texas series. Still, Price will be looking to make some fixes after his shaky Game 1 appearance.

The Royals’ remarkable defence is on full display in the outfield, where Lorenzo Cain, Alex Gordon and former-Jay Alex Rios cover huge amounts of grass to take hits away.

The Blue Jays can’t expect to receive any lucky errors and should be prepared to be robbed of a hit once or twice. Then again, the Royals can’t catch home runs.

The Blue Jays stormed back after losing the first two games of the American League Division Series to take two on the road. Then, after a bizarre 7th inning that still has the baseball world buzzing, they won game five to advance to the ALCS.

The Royals, meanwhile, also had their backs against the wall and were even down by four runs in Game 4 before staging a shocking comeback against the young Houston Astros.

Which team will be more resilient this round?

Kansas City lost the World Series last season in brutal fashion, making it all the way to Game 7 before being dominated by the San Francisco Giants ace Madison Bumgarner in what many consider the finest modern postseason pitching performance ever.

That has nothing to do with the Jays. But the sports history books — from soccer to basketball to hockey — are littered with teams that just missed, then came back to win it all.

R.A. Dickey leapt into the crowd as he celebrated the team’s American League Division Series win, and for good reason.

Dickey was brilliant in his postseason debut, but was pulled early in the game for David Price.

The veteran knuckleballer admitted his disappointment, but now he’ll get another chance against the Royals — who he dominated for seven innings when the teams last met in August. 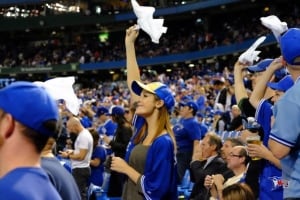 The Rogers Centre was packed and roaring for all three home games of the ALDS. (John Rieti/CBC)

The faithful of both clubs are starved for a champion.

Jays fans, resplendent in blue, white and vintage 1992-93 World Series gear from the team’s championships, came out in force for the ALDS.

Yes, some “fans” briefly lost their minds and threw things from the 500-level onto the field and crowd below, but the intimidating roar that tore through the stadium during the 7th inning surely played some factor in the three errors committed by the Rangers.

Royals fans have to be of a certain age to remember their lone World Series win, in 1985, and they endured a 23-year stretch without playoff baseball, including several 100-loss seasons. The passionate bunch helped the team set an attendance record this season, so Kaufmann Stadium will be rocking tonight.