A mere eight days after their epic first leg of the Eastern Conference final, Toronto FCand the Montreal Impact produced another playoff classic, this time with TFC earning a thrilling 5-2 extra time win in the decisive return match on Wednesday night.

The record crowd of 36,000 spectators at BMO Field on this wet and rainy evening were treated to one of the most memorable playoff games in Major League Soccer history, which was dramatically capped off by goals from Toronto substitutes Benoit Cheyrou and Tosaint Ricketts, and highlighted by a man-of-the-match performance by Jozy Altidore. TFC becomes the first ever Canadian team to advance to the MLS Cup final.

With a 7-5 aggregate win in this two-game series, Toronto clinched home-field advantage for the MLS Cup on Dec. 10 when it will host the Seattle Sounders, the Western Conference champions. Unlike in the NFL with the Super Bowl, MLS’s championship game isn’t held at a neutral site—instead, the higher seed of the two finalists gets to host. 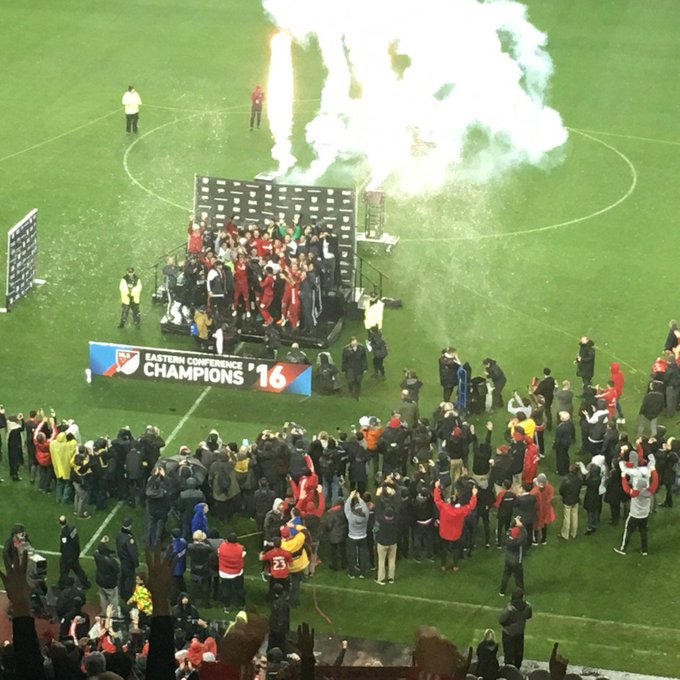 Toronto FC coach Greg Vanney has been around MLS since the beginning. A former defender of some repute, he played in the inaugural 1996 season and has seen the highs and lows of this league. Wednesday night was a highlight for the MLS veteran.

“For me, [this] was the most exciting playoff event that I’ve ever been a part of and ever seen,” Vanney stated.

Down 3-2 from last week’s opening leg in Montreal, TFC showed great grit and determination in this sensational encounter against an Impact side that refused to quit and pushed the hosts to the brink of elimination.

“We have a lot of respect for the team that was on the other side, the Montreal Impact,” Vanney admitted.

“They’re [a tough team]. One of my messages was there was no way, no chance, no how we were going to get out-competed tonight in front of our fans in our stadium. … [Montreal] didn’t give an inch, so it was just one of those battles.”

Toronto captain Michael Bradley is renowned for being very guarded with reporters who regularly cover the team, but he let a tidal wave of emotion creep through to the surface as he spoke during the post-match press conference.

The overwhelming sense of occasion—of how this franchise that was once considered the laughing stock of MLS now finds itself 90 minutes away from winning a league title—and what this victory meant to the city and the team’s long-suffering and loyal fan base was not lost on Bradley.

“I dropped my son off at school this morning, and I swear I saw every kid that walked into that elementary school was wearing a TFC jersey, and most of the parents, as well. You can feel it in the city that people have really taken notice, people are proud, and people are excited,” Bradley stated.

Montreal coach Mauro Biello used the exact same starting 11 for the fifth straight match, while Vanney kept his 3-5-2 formation intact but made one change to his lineup for the first time in six games, replacing midfielder Jonathan Osorio with fellow Canadian Will Johnson.

Tensions boiled over early in the contest following a heavy collision between Altidore and Montreal’s Hernan Bernardello. Both players went up in the air to challenge for the ball, with Altidore leading with his shoulder into Bernardello who crashed headfirst on the ground. A melee broke out with both teams having to be separated by the officials. While Montreal players called for Altidore to be sent off, the American escaped without being cautioned.

Playing its usual counter-attacking style, Montreal opened the scoring in 24th minute with its first shot on goal. Montreal’s Patrice Bernier dispossessed Bradley, and Matteo Mancosu delivered a smart pass to Dominic Oduro who slipped in behind the defence. The former TFC forward took it in full stride and then slotted it past goalkeeper Clint Irwin.

It was a total sucker punch after Toronto carried the majority of the play up until that point. But the Reds, now needing to score twice, valiantly fought back and poured on the pressure. 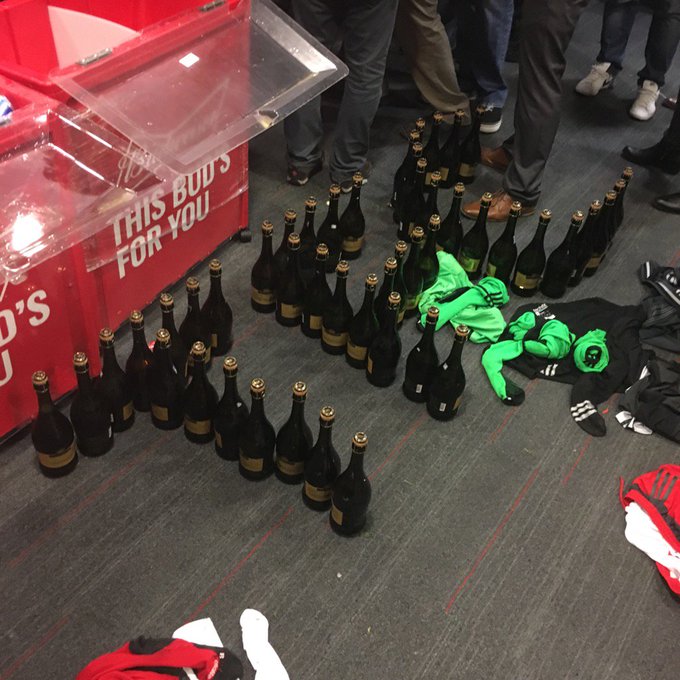 A BIT OF CHAMPAGNE IN THE #TFC LOCKER ROOM PIC.TWITTER.COM/CKDJYTTRJZ

TFC’s efforts paid off in the 37th minute as Armando Cooper made it 1-1, the Panamanian scoring from close range on a rebound after Montreal failed to clear its lines off a corner kick. Toronto took the lead just before halftime, again off a corner kick that Montreal poorly defended. Altidore easily beat Bernardello to the ball whipped into the box by Sebastian Giovinco, and he nodded it inside the near-post on an attempt that goalkeeper Evan Bush should have saved.

There was another twist in the tale early in the second half. Johan Venegas, who substituted in for Bernardello, effectively held off a Toronto defender inside the box before the ball fell to Ignacio Piatti who somehow stabbed a shot that slowly trickled past Irwin. Oduro looked to be offside on the play, as he interfered with Toronto defender Steven Beitashour from making a clearance, but the goal stood.

Nick Hagglund gave Toronto a lifeline 15 minutes later, his majestic header nestling inside the back of the net after teammate Justin Morrow delivered an inch-perfect cross into the box.

Montreal exerted a bit of pressure and kept Toronto pinned inside its half for long stretches. But it was the home side who carved out a trio of scoring chances late in regulation time, with Altidore, Giovinco and Ricketts all failing to convert from inside the 18-yard box. 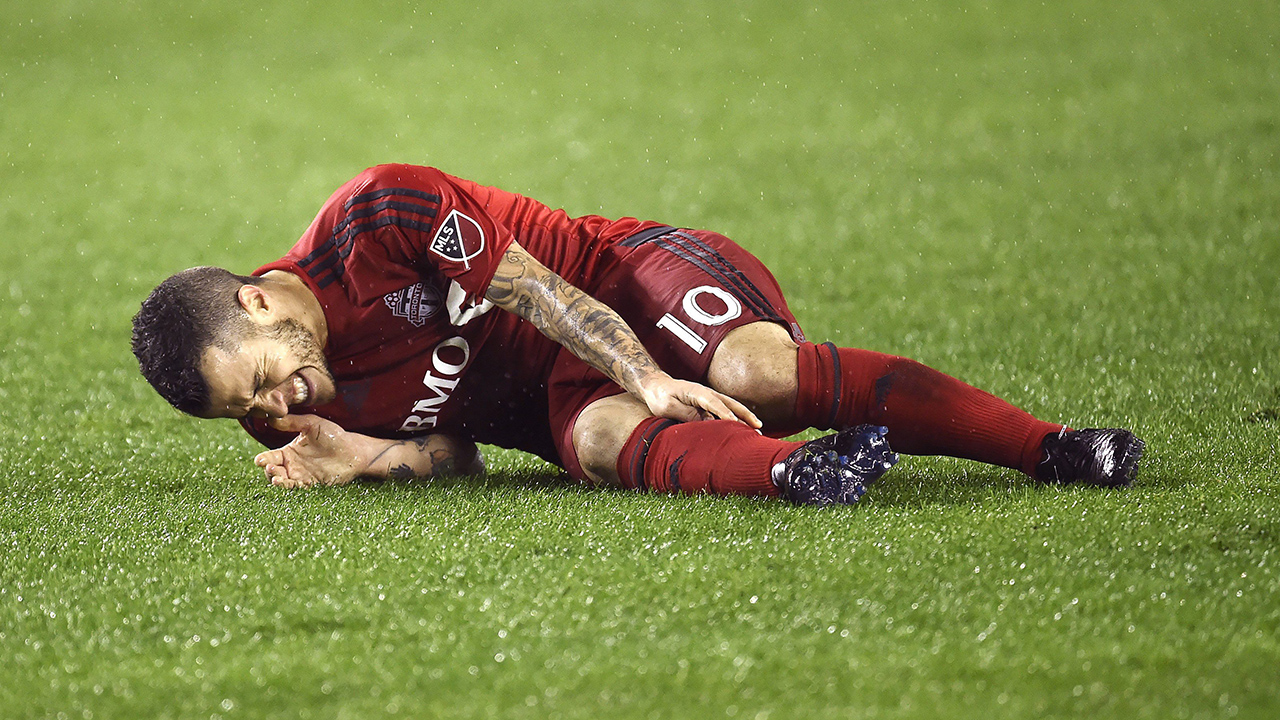 Yet another plot twist came in the first extra-time period when Giovinco limped off the field due to cramping and was replaced by Cheyrou. It may have been a switch forced by Giovinco’s injury, but the selection of Cheyrou to replace the Italian proved to be inspired. Moments after stepping onto the pitch, the Frenchman scored on a diving header from deep inside the box off a cross from Beitashour in the 98th minute.

Toronto wasn’t done. With Montreal still reeling, Altidore brilliantly skipped down the right side, giving his defensive mark the slip, and delivered a great ball into the penalty area that Ricketts turned in from close range in the 100th minute.

“The players gave everything all the way to the end. It’s a tough moment, when you’re so close and falling short. But we’ll be back, and we’ll be even stronger,” Biello promised.

Bedlam ensued at the final whistle, as supporters exploded in celebration in the stands and TFC players ran onto the field before being awarded the Eastern Conference Championship at midfield as an array of fireworks went off, lighting up the Toronto skyline along the waterfront.